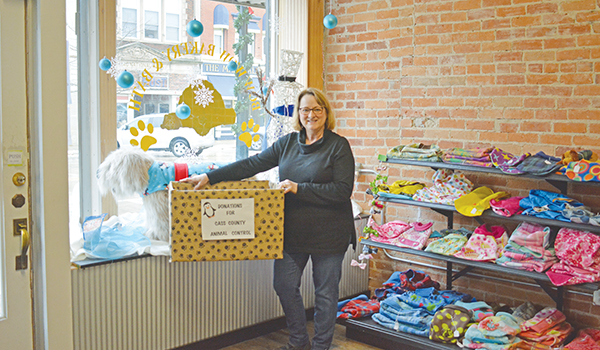 DOWAGIAC — Those seeking to warm their hands during next month’s Ice Time Festival in downtown Dowagiac will have the chance to do so while running their fingers through the fur of an adoptable Cass County animal.

“This helps both me and the animal shelter by bringing awareness to a need in the county,” said Deb Rohdy, owner of the business.

“Last year, it was very successful in terms of donations,” Rohdy said. “People really like giving to a local cause.”

Director of Cass County Animal Control Ron Butts said he was grateful to Bow Wow Bakery and Bath for supporting the animal shelter, adding that he is always appreciative when the community steps up to help local rescue animals.

During last year’s event, Cass County Animal Control adopted out a few cats, and Butts said he is hoping to adopt out even more animals this year. He said he believes adoption is vital due to a high volume of shelter animals nationwide.

“Even just one adoption helps because it frees up a cage,” he said. “In that way, adoption is like saving two lives. … If you are thinking of getting a new pet, give your local shelters a shot, because we have some very nice animals.”

Rohdy said participating in the promotion is one way that she likes to give back to the community throughout the year. She said she especially likes giving back to an animal shelter, as she estimates that 90 percent of the dogs that come through her business are rescue animals.

Rohdy added that she would invite any Ice Time Festival attendees to visit the store, where she will be serving hot chocolate to warm up visitors. While there, she said she would encourage visitors to donate an item and see adoptable animals.

“It’s a great festival, and we all benefit from this,” she said.