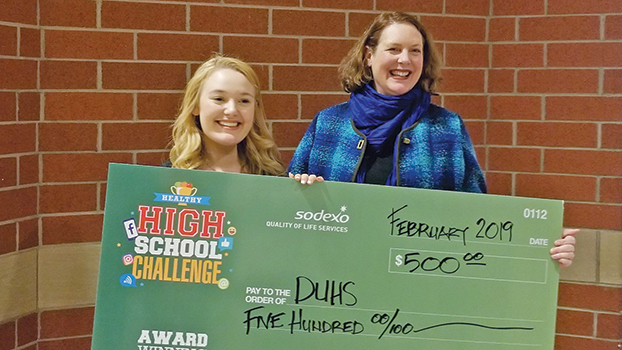 DOWAGIAC — Recently, Dowagiac Union High School was presented with a reward for healthy choices its students had made.

During the Jan. 14 Board of Education meeting, Sodexo, the district’s food service provider, presented a $500 check to Dowagiac Union High School as a reward for the high school’s performance in the company’s Healthy High School Challenge that took place in October 2018. Throughout the contest period, Sodexo officials awarded the school points based on the number of healthy decisions they made during lunchtime. The school could earn points for everything from purchasing a nutritious hot meal from the cafeteria to grabbing a healthy choice from the snack bar.

For the program, Dowagiac competed against 229 other high schools across the nation. Dowagiac Union High School came in 52nd place, according to Deb Cahill, the district’s food services director. The $500 will go to the student senate and the Chieftain Heart, Cahill said.

“It’s very exciting,” Cahill said. “We really get students to get into it.”

Also this year, Dowagiac Union High School student Tyler Malin, also known as “Ty Mater,” won a $1,000 School Spirit Award through the Health High School Challenge. For the award, Malin submitted a humorous video, in which he played the banjo, that encouraged students to eat healthily and pick the right foods to fuel their bodies.

According to Cahill, Malin will be giving part of his winnings to Dowagiac Union High School and the Special Olympics.

Cahill said she was proud of what Dowagiac Union High School students were able to accomplish during last fall’s contest, adding that she believes the competition encourages students to make healthier choices with their food.

“We give students the options, but they make the choices,” Cahill said. “It’s important that we get students thinking about making healthy decisions, and I think [the competition] incentivizes them to do that to earn money for their school.”

For next year’s competition, Cahill said she wants to place even higher among the participating schools and get into the bracket that earns $1,000 for points earned.