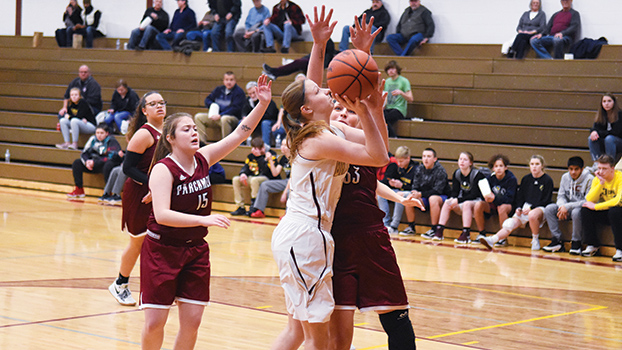 NILES — Due to a quirk in the schedule, the Brandywine girls basketball team has only played three games since before Christmas.

The Bobcats showed little signs of being rusty and more like a time hungry to get back on the court in their 67-17 rout of visiting Parchment in BCS Athletic Conference Red Division action last Thursday night.

Brandywine jumped out to a 19-5 first quarter lead, which it stretched to 44-7 by intermission.

Senior Nicole Sachman, who scored a game-high 18 points, said the team was getting tired of practicing and was ready to take out its frustrations on the Panthers.

“It was really rough because we were not practicing for a game,” she said. “They were not boring because we were not doing the same thing every day and coach (Josh Hood) tried to mix it up. It went by pretty slow, but it helped us in the long run and that showed tonight. We were really eager because we had a few bad practices and were hoping it would not show when we had all kinds of positive practices too. I think we did that.”

One of the things that can happen when a team has a long stretch of not playing games is its shooting.

Brandywine showed no signs of a struggle in that department and displayed a good balance of scoring from both inside and beyond the 3-point arc.

The Bobcats had nine three points to go along with seven baskets inside, something that was pleasing to Hood.

“We had a lot of time off to rest our legs,” he said. “We did a lot of shooting drills. We have been shooting it really, really well. What I am most proud of is that is one of the best halves that we have played in the last several years. We shared the ball well. We went through four of five different press breaks and we adjusted. We are doing a phenomenal job of being unselfish and making that extra pass. When you look up in the second quarter and you are up 40 points, that is sharing it pretty well.”

Hood also liked how his team, despite the score, hustled and gave themselves up in time to earn the victory.

“We had several unselfish plays where girls put their bodies on the line as they are diving and passing to wide-open girls,” he said. “We chuck a lot of threes, and we shot a lot tonight, but we passed up some really good looks from three to a girl who was wide-open for a layup. I was really proud of the girls.”

With only eight girls on the roster, Hood keeps his team fresh by running substitutions in and out constantly. Each player knows they have a job to do in the time they spend on the court. They relish that time and appear to be making the extra effort to make sure everyone is involved no matter what the lineup is at any given point.

“There are not a lot of ‘I’ players on this team,” Hood said. “We only have eight. They are playing very unselfish. It has been a long four and a half, five weeks, so it is exciting to know now that we have two games a week the rest of the way until districts. We have to get better in practice and we will.”

Besides Sachman, the Bobcats got 15 points from Kennedy Byrd and 13 points from Zakiyyah Abdullah. Alexis Rhodes chipped in with nine points.

Brandywine (8-1, 3-1 BCS Red) heads to New Buffalo for a non-divisional game tonight against the host Bison. Tipoff is set for 6 p.m.