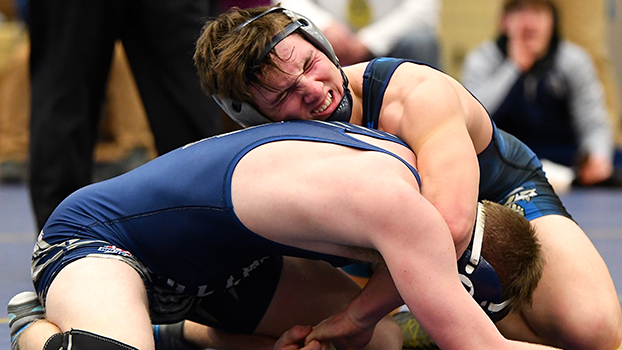 The Niles wrestling team will head to Lowell on Saturday for a tournament stacked with ranks teams. (Leader photo/KELLY SWEENEY)

DOWAGIAC — The Dowagiac wrestling team is coming off a second-place finish at the Brent Stephenson Memorial hosted by Mendon on Saturday.

The Chieftains went 4-1 on the day, dropping only a 35-33 decision to arch rival Edwardsburg.

Following a pair of Wolverine Conference matches at Three Rivers on Wednesday, the Chieftains will gear up for the always tough Lakeshore Super Duals on Saturday.

Dowagiac will wrestle St. Joseph in the opening round before facing Lakeshore in the second round, Hudsonville in the third round and No. 5-ranked (Division 1) Rockford in the final round.

Wrestling is scheduled to begin at noon.

For the first time in many years, Niles will not be competing in the Lakeshore Super Duals.

This year, the Vikings are headed to Lowell for the Gary Rivers Super Duals.

“Lowell invited us up last season and I thought it was good to get a little separation from Lakeshore,” said Niles coach Todd Hesson. “We see them so much at the end of the season. Thought it would help us break out of the routine of seeing them so often.”

Niles, ranked No. 7 in Division 2, while face host Lowell, the No. 1-ranked team in Division 2 in the opening round.

“Saturday is a small, but extremely tough tournament with Allendale and Niles being the two lowest ranked teams. We kick off the wrestling with No. 1 ranked Lowell, who just knocked off Indianapolis Cathedral, the No. 1-ranked team in Indiana. I am hoping we continue to learn to compete! We had a great dual with No. 2-ranked Eaton Rapids earlier in the season and lost by a point, but wrestled extremely competitive. That is exactly what we need tough matches as a team and individuals, its great preparation for the upcoming postseason.”

The Dowagiac wrestling team will open defense of its Division 3 district championship against Paw Paw Feb. 6.

The Chieftains will face Paw Paw in the semifinals at Three Rivers High School, while the host Wildcats will face Constantine. Both matches are scheduled to begin at 6 p.m.

The winners will advantage to the championship match, which will be held 10 minutes after the completion of the last semifinal.

Admission is $5 per person and no passes will be accepted per the Michigan High School Athlete Association.