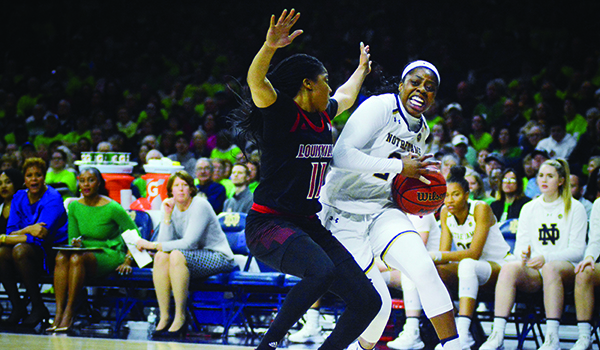 I have to admit, until March, I rarely follow college basketball.

That is with the exception of the Notre Dame women’s basketball team.

I have been a huge fan of theirs for many years now.

Perhaps it all started when head coach Muffet McGraw was the featured speaker at the Dowagiac Athletic Booster’s Banquet.

She was an excellent speaker and left an impression on me that has lasted all these years.

I am not one for jumping on the bandwagon because a team is successful.

The Fighting Irish were already successful when I really started paying attention to them, having already won a national championship in 2001.

My interest continued to grow in Notre Dame as I covered a game here and there and began regularly covering their postseason play, which comes at a time when our high school teams are between seasons.

The more I watched McGraw and her team, the more I grew to enjoy their style of play and their work ethic. Our local teams, both boys and girls, could learn a lot from her, her staff and her players when it comes to working hard in practice in order to expect success on the court.

I kick myself every year when I miss the opportunity to cover the Notre Dame-Connecticut basketball game.

They are two of the top three programs in the country and somehow, I fail to get myself a credential and cover their games.

I wanted to kick myself last Thursday night when I watched on television Notre Dame take on Louisville in the battle of No. 1 versus No. 2 teams. I did send our talented photographer Emily Sobecki to the game and she came back with some great shots.

But why did I not go to the game? After all, I arranged for the credential for Emily. I guess I did not realize it was a game between the top two teams in the country until I felt it was too late to request a credential.

All I missed was a great college basketball game.

I missed Arike Ogunbowale knocking down more buzzer-beaters and putting on an offensive show in the second half of the Notre Dame victory that was remarkable.

She scored 26 of our 30 points in the second half when the Fighting Irish needed them most.

She has ice water in her veins and is a stone-cold assassin.

It is a true pleasure to watch her perform, especially in big games.

I know the Fighting Irish lost to Connecticut back in December, but if I were a betting man, my money would be on Notre Dame to win the national title again this season.

The women’s field is as open as it has been in many years. There are probably five or six teams that could legitimately win the national championship and I would not be surprised.

But if there is going to be a favorite come March, I think that favorite should be McGraw and her Fighting Irish.