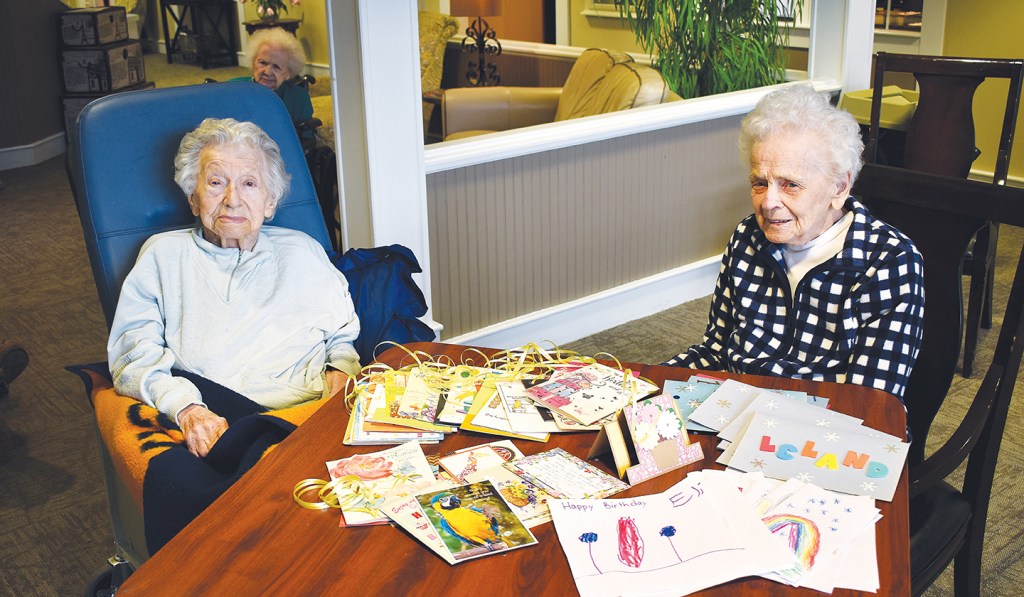 Helen Buti (left) and Miriam “Mickey” Eucce sift through their birthday cards at the Buchanan Meadows assisted living facility. Both Buti and Eucce have 100th birthdays in February and are asking the community to send them 100 cards each. (Leader photo/KELSEY HAMMON)

BUCHANAN — Buchanan Meadows residents Miriam “Mickey” Eucce and Helen Buti will celebrate their 100th birthdays in February. These “Centennial Birthday Girls” are asking for the community to send them 100 birthday cards to commemorate the occasion.

Heather Bachman, the life enrichment director at Buchanan Meadows, said they put out a calling on Facebook to send cards to Eucce and Buti. By Friday, the women had received cards from across the country. Some were handmade by Ottawa Elementary students, and others came from friends, family and community members.

Bachman said she believes the cards will show the residents that they are celebrated.

“I’ve noticed when we had other card parties … and the community reaches out to them, they remember that there is something beyond these four walls,” Bachman said. “It’s kind of nice to know other people think of you.”

When asked if she had any other birthday wishes, Eucce’s response was matter of fact.

“I have everything,” Eucce said.

Eucce was born Feb. 10, 1919, in Paxton, Illinois to Ruby Olive and Adolf Wickstrom. After high school, she attended nursing school and became a nurse. As a nurse, Eucce worked with babies and helped during surgeries. She married Richard Eucce and eventually, she left the field to focus on raising her six children. One of her daughters is Andrea van der Laan, former superintendent of Buchanan Community Schools.

Buti was born Feb. 3, 1919, to Steven and Rosa Bella. She grew up on a farm as one of eight children. She attended Webster school in South Bend until the ninth grade. She continued her education at a beauty school and became a beautician, specializing in hair and nails. Buti would go on to style hair from her own home and work for Electro-Voice.

She married Joseph Alex Buti. On her lap next to her pile of birthday cards is a picture of him she keeps near. The photo shows her and Joseph on a beach when they were young. The couple loved ballroom dancing and going to garage sales when they were not busy with their three children.

Reflecting on their lives, Eucce and Buti cited their children as their most significant accomplishments.

For those looking to reach 100 years themselves, Eucce and Buti offered a bit of advice. For her part, Buti said: “Don’t smoke.” While van der Laan, who helped her mom sift through the birthday cards Friday, said Eucce has always emphasized staying active and independent.

To help them celebrate their birthdays, Bachman encouraged people to help them obtain 100 birthday cards.

Those looking to send Eucce and Buti birthday cards can address them to the “Centennial Birthday Girls” at Buchanan Meadows, 809 Carrol St. Buchanan MI 49107.