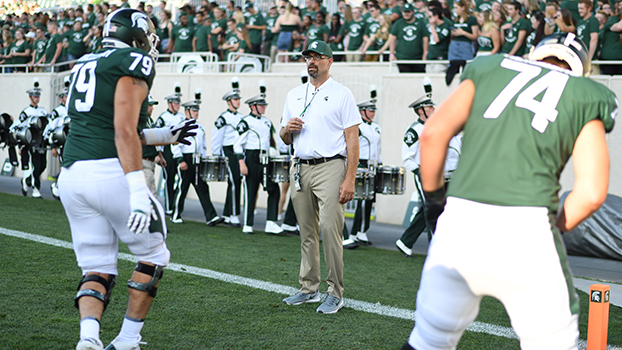 EAST LANSING — Michigan State head football coach Mark Dantonio announced on Thursday a restructuring of his staff for the 2019 season.

Brad Salem, who is entering his 10th season under Dantonio at MSU, has been promoted to offensive coordinator for the Spartans. Salem spent his first three seasons in East Lansing as the running backs coach and has been the quarterbacks coach the last six years. A former Division II head coach at Augustana (S.D.) for five seasons from 2005-09, Salem will also return to coaching the running backs, where he previously mentored All-Big Ten players Le’Veon Bell and Edwin Baker.

Dave Warner will return to coaching the quarterbacks, where he first started at MSU from 2007-12, after serving as co-offensive coordinator and running backs coach from 2013-18. Jim Bollman will make the switch from coaching tight ends to the offensive line, while Mark Staten, who has been on Dantonio’s coaching staff the past 15 seasons, will rejoin the tight ends room and also add duties of special team’s coordinator.

Don Treadwell, who served as Dantonio’s offensive coordinator for three seasons (2004-06) at Cincinnati and four years (2007-10) at Michigan State, will return to the offense coaching the wide receivers. Treadwell rejoined the Spartan staff in 2018 as an assistant defensive backs coach while mentoring the freshmen.

Terrence Samuel, the wide receivers coach from 2011-18, will transition into the role that Treadwell had last season on the defensive side of the ball.

Defensive coordinator/linebackers coach Mike Tressel, who helped direct the No. 1 rushing defense in the nation in 2018 and was nominated for the Broyles Award, has added the title of assistant head coach. The rest of the defensive staff (Chuck Bullough, defensive ends; Ron Burton, defensive tackles; Paul Haynes, secondary) will remain in their same roles. Bullough and Burton were named the national defensive line coaches of the year by Football Scoop.

“Our staff has done an outstanding job building relationships and developing our players,” said Dantonio. “I think it’s important to note the success that we’ve had here with our coaches. Together as a group, our staff has won more than 100 games along with three Big Ten Championships. We had the most successful three-year run in the history of this program with this staff in place, with multiple Big Ten position players of the year, All-Americans and NFL players during that span, in addition to breaking numerous school records.

“There are high expectations around here, expectations we’ve helped create. We are certainly not celebrating a 7-6 season. We were in every game and played excellent defense, but we have to find a way to get those inches in the close games next season.

“With that being said, I’ve decided to make some internal changes on the staff that I feel will help us moving forward. There’s no question we need more production on the offensive side of the ball, but I do not feel that we need to start over. Scheme-wise, I think the main point is finding more production and getting better execution in all areas. This staff has great cohesion and works extremely well together. We can get to work immediately with these changes.

“The last time we made some adjustments on our offensive staff, our offensive production improved significantly. These are the same offensive coaches who fueled that run. I’m excited to get back to work with this group and feel like we have the team chemistry and personnel to have a very successful upcoming season.

“We have an experienced staff that knows how to develop players and win championships. We’re going to play inspired football next year and we’re going to get ready.”

During his time as quarterbacks coach, Salem tutored the winning quarterback in school history, Connor Cook, who led the Spartans to three straight top-six finishes in the national polls and two Big Ten Championships while being named the 2015 Big Ten Quarterback of the Year and winning the Johnny Unitas Golden Arm Award.

“Brad Salem will take over the coordinating duties on offense,” said Dantonio. “Brad has done a tremendous job in the QB room and has had multiple offers to be a coordinator at other Power 5 schools. I feel like he’s earned this opportunity and will do an outstanding job. He will also return to coaching the running backs, where he started when he first got here and coached All-Big Ten and NFL players like Le’Veon Bell and Edwin Baker.”

Bollman joined Dantonio’s staff at MSU in 2013 as co-offensive coordinator and tight ends coach. The four-decade coaching veteran, who has been with Dantonio on four different staffs, helped fuel the winningest three-year stretch in program history from 2013-15, as the Spartans went 36-5, won two Big Ten titles and played in three consecutive BCS/New Year’s Six bowls. Bollman was MSU’s offensive line coach from 1995-97 and coached the offensive line at Ohio State from 2001-11, sending numerous players to the NFL.

Staten has been on Dantonio’s staff for the last 15 seasons, including three years at Cincinnati (2004-06) and all 12 at Michigan State. Staten began his tenure at Michigan State as the tight ends/tackles coach from 2007-10 and has helped develop multiple NFL tight ends, including Brent Celek at Cincinnati and Kellen Davis, Garrett Celek and Dion Sims at MSU. During his time as offensive line coach, Staten coached All-Americans Jack Allen and Jack Conklin, and Conklin became MSU’s highest NFL Draft selection (No. 8 overall in 2016) in the Dantonio era.

Although he was on the defensive staff last season, Treadwell has been an offensive coach throughout his entire career, including the wide receivers coach twice previously at MSU (2000-02; 2007-10). He mentored MSU’s all-time leading touchdown receiver and All-American Charles Rogers in 2001-02; Rogers won the Biletnikoff Award as the nation’s best receiver in 2002. Treadwell was the offensive coordinator on MSU’s first Big Ten Championship team under Dantonio in 2010.

During his time as wide receivers coach, Samuel’s receivers earned All-Big Ten recognition eight times, including two Big Ten Receivers of the Year (Tony Lippett in 2014 and Aaron Burbridge in 2015). Samuel began his full-time coaching career on the defensive side of the ball, coaching defensive backs and linebackers at Nebraska-Omaha.

The rest of the defensive staff will remain in place for the 2019 season.

After finishing the 2018 season ranked No. 1 in the FBS in rushing defense (77.9 ypg), No. 8 in scoring defense (17.2 ppg) and No. 10 in total defense (303.2 ypg), the Spartans will return eight defensive starters for the 2019 season, including five juniors – linebacker Joe Bachie, safety David Dowell, defensive tackle Mike Panasiuk, defensive end Kenny Willekes and nose tackle Raequan Williams – who have already earned All-Big Ten honors during their careers and will return for their senior season in 2019.

Panasiuk and Williams were key reasons why MSU featured the top-ranked rushing defense in the country. The duo has started 29 consecutive games alongside each other, dating back to the 2016 season, and the streak will continue into 2019. Panasiuk was a second-team All-Big Ten choice by Pro Football Focus after collecting a career-high 6.5 tackles for loss as a junior, while Williams racked up career bests in tackles (49) and tackles for loss (9.5) to pick up first-team All-Big Ten accolades by The Associated Press.

Dowell, a first-team All-Big Ten safety in 2017, will return for his third year as a starter in 2019. He already has seven career interceptions and has started 23 consecutive games.

In addition, the Spartans will welcome back cornerback Josiah Scott, a 2017 Freshman All-American who had to sit out the first eight games of 2018 with a knee injury but still was incredibly successful in his five games back in action as a sophomore, including a performance in the Redbox Bowl (four pass break-ups, 8-yard tackle for loss) that earned him Most Outstanding Defensive Player honors.

On the offensive side of the ball, MSU returns eight starters, including seven with multi-year starting experience.

MSU opens the 2019 season at home against Tulsa on Friday, Aug. 30 in Spartan Stadium.