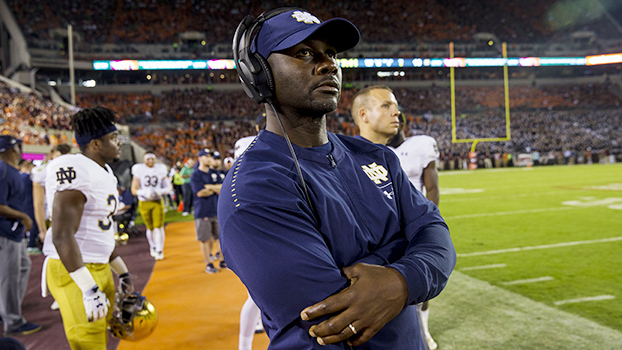 “This is a great day for Buccaneer football,” Barber said. “Autry Denson is a special person in many ways and stands out as both a recruiter and a coach.  More importantly, he cares about his players as people first and will, therefore, have great influence on their hearts and lives and will develop each of them into outstanding young men.”

Denson comes to the Buccaneers after spending the last four seasons as the running backs coach at Notre Dame after taking on the role in 2015. His success in the role helped guide the Fighting Irish to the FBS College Football Playoffs and a berth at the Goodyear Cotton Bowl Classic.

Denson is looking forward to the next step of his coaching career and is thankful for the opportunity to take the after much prayer and reflection with family, former teammates, and mentors.

“First and foremost, I would like to thank God because this is His plan being played out on His timing,” Denson commented. “My family and I have always trusted God for promotion. I want to thank Dr. Costin for his vote of confidence and support, as well as our athletic director Jeff Barber.”

Denson, for his part, was clear on what led him to pursue the position at Charleston Southern.

“I was drawn to Charleston Southern by the vision of this great Christian university of integrating faith in learning, leading, and serving,” he said. “As a result, I knew this could be a place where I could build and lead a program to honor Christ by operating with character, integrity, transparency, accountability, and community.”

2017 was another successful rushing year for the Fighting Irish paced by Josh Adams’ 1,430 rushing yards, while Brandon Wimbush led the team with 14 touchdown carries. UND recorded 3,503 rushing yards on the season and was seventh in FBS in rushing offense with 269.3 yards per game.

Denson coached a Notre Dame running back group in 2016 that rushed for 10 TDs and 1,471 yards on 275 carries — good for a 5.35 yards per carry average. Helped Josh Adams lead the Irish in rushing in 2016 with 933 yards on 158 carries and five TDs. Adams is the fastest Notre Dame running back to reach 1,000 career rushing yards (16th career game) since Darius Walker accomplished the feat in his 14th Irish game in 2005. Adams closed the 2016 campaign with his eighth career 100-yard rushing game and a career-best 180 yards at rival Southern California.

In his first season with the Fighting Irish, Denson coached a Notre Dame running back group in 2015 that rushed for 18 TDs and 1,967 yards on 299 carries — good for a 6.58 yards per carry average. He mentored C.J. Prosise in 2015 — who rushed for 1,032 yards (18th 1,000-yard rushing season in school history) in his first season at the position. Prosise eclipsed the 1,000-yard rushing barrier faster than any Irish running back in school history with the exception of All-American Reggie Brooks in 1992 and was drafted in the third round of the 2016 NFL Draft by the Seattle Seahawks.

He also tutored Adams — who rushed for 835 yards in 2015 — best in freshmen school history. Adams ran for 168 yards at Stanford — topping the school’s 40-year-old single-game freshman record. The Irish ran for a season-high 457 yards vs. UMass  — the best rushing total by Notre Dame in 23 years. Notre Dame registered 299 yards on the ground vs. Stanford — the most by an opponent in Cardinal head coach David Shaw’s five seasons (35 carries for an 8.5 per-carry average against nation’s No. 22 rush defense).

His first collegiate coaching stop came as the running backs coach at Bethune-Cookman University for three years (2011-13). He was a key member of a coaching staff that helped the Wildcats to a 10-3 record and Football Championship Series playoff berth in 2013.

In 2012, he coached a 1,000-yard rusher as Jackson ran for 1,069 yards, becoming the first Wildcat to eclipse 1,000 yards rushing since 1997 and the first Bethune-Cookman player to finish the season ranked either first or second in the Mid-Eastern Athletic Conference in rushing. The back group recorded 2,928 yards, collected 28 of the team’s 43 touchdowns and saw four different players run for more than 400 yards on the year. He was also part of an offensive coaching staff in 2012 that helped Bethune-Cookman lead the MEAC and rank 10th nationally in rushing (244.4 yards per game).

His inaugural season with the Wildcats saw the group post 2,058 rushing yards and finished fifth nationally in rushing (259.3 yards per game)

He also served as the head coach for one season at Pope John Paul II High School in Boca Raton, Florida (2010)

Denson worked with the Indianapolis Colts and Miami Dolphins as part of the Bill Walsh NFL Minority Coaching Fellowship, where he reunited with former Tampa Bay and Indianapolis head coach Tony Dungy, who drafted him for the Buccaneers in the seventh round of the 1999 NFL Draft.

He also formed a youth program called POISE (Perseverance, Opportunity, Intelligence, Sacrifice, and Effort) that worked with teenage athletes throughout Broward County, Florida, in education, on the field, and in Bible study

Denson was also the inaugural commissioner of the Run for Your Goal Youth (RFYG) Flag Football League, which provided a safe place for the youth of South Florida to learn the game of football.

He finished his playing career as the all-time leading rusher in Notre Dame school history with 4,318 yards. Denson currently ranks second in the Notre Dame annals with 43 career rushing touchdowns and 5,327 all-purpose yards. He was a four-year monogram winner, a three-year starter and two-time Most Valuable Player at Notre Dame (1995-98).

He eclipsed 1,000 yards rushing over each of his final three years with the Irish and was named an Associated Press All-America selection as a senior in 1998. Denson wrapped up his collegiate career as the 1999 Gator Bowl Most Valuable Player.

Denson was selected in the 1999 NFL Draft by the Tampa Bay Buccaneers and spent time on the rosters with the Miami Dolphins, Chicago Bears, Detroit Lions, and the CFL’s Montreal Alouettes. 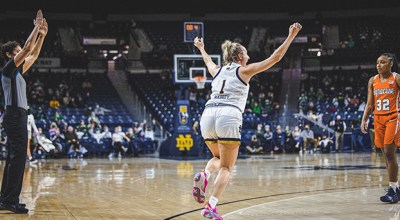