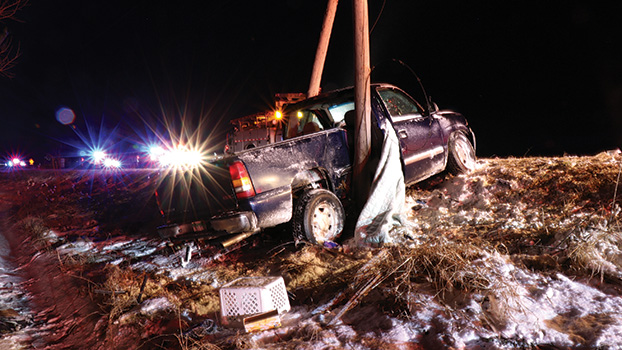 After a Nissan crossed the center line and struck a GMC Wednesday, the GMC left the roadway, crashing into a utility pole in Bainbridge Township, according to the Berrien County Sheriff’s Department. (Submitted photo)

BAINBRIDGE TOWNSHIP — Two people were injured Wednesday evening in a head on crash on Napier and Arent Road in Bainbridge Township, according to the Berrien County Sheriff’s Department.

Officers responded to the crash at 5:26 p.m., where they determined that the driver of a Nissan crossed the center line and struck a GMC Sierra. The GMC left the roadway and crashed into a utility pole, breaking it in half.

The case remains under investigation. Alcohol is believed to be a factor, according to authorities with the Berrien County Sheriff’s Department. AEP is currently replacing the utility pole. Traffic was rerouted around the scene.