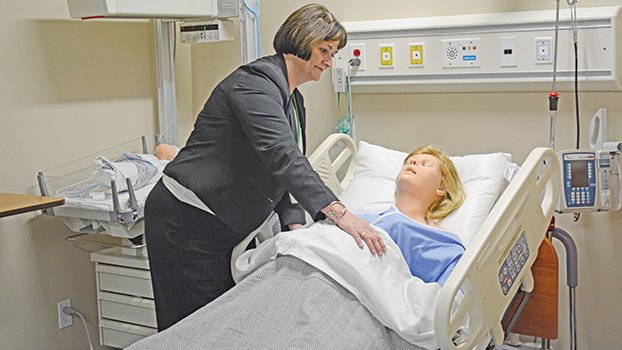 The new SMC nursing facility will allow students to work in simulation labs on mannequins capable of emulating real-life medical conditions. Pictured is nursing department chair Debbie Green with one of the dummies. (Leader photo/SARAH CULTON)

DOWAGIAC — Leadership at Southwestern Michigan College has long been preparing to usher in a new era of nursing. Now, the college has the facility to make that dream a reality.

Wednesday evening, SMC hosted a reception to unveil it’s newly renovated and expanded nursing facility on its Dowagiac campus. The new 29,086 square-foot facility, more than double the size of the previous building, cost a total of $9.6 million, with $4 million coming from a state grant and $1.1 million coming from donors. Construction on the nursing project began in August 2017 and was completed in December 2018.

“It feels great to finally reveal this,” said SMC President David Mathews. “It’s certainly been a long journey, and I’m just so excited about how we are going to be able to do more and grow our nursing program and add other health-related programs. It is just real exciting.”

• Two eight-bed skill labs that will provide students with a place to practice skills such as inserting IVs, checking blood pressure and performing total body assessments.

• A four-bed simulation lab that is a complete replica of a hospital room. In the simulation labs, students will be able to work with mannequins that are capable of emulating real-life medical conditions such as high blood pressure, cardiac arrest, bleeding and giving birth.

Mathews said the simulation lab would provide students with a better education by giving them hands-on experience.

“In some ways, this is the heart of this facility,” he said. “Our students will have the chance to work with robots in these simulations and work through some very challenging scenarios.”

The new facility will also allow SMC to accept more nursing students each year, according to Rebecca Jellison, dean of the school of nursing and health sciences at SMC. Currently, the program accepts 40 students each semester.

Mathews said the nursing program has always been a flagship program at SMC and that the new expanded and upgraded nursing facility was a necessary investment to continue to provide quality education to nursing students at the college. Since 1964, SMC has graduated more than 3,000 registered nurses from its program.

“Since the beginning, nursing has been important to both SMC and the community,” Mathews said. “SMC nursing graduates are so woven into the community, and they will continue to be. It’s part of who this college is and to have a facility like this for our students is just really exciting.”

At Wednesday’s reception, Dr. Pamela Jeffries, dean of the school of nursing at George Washington University, spoke as guest speaker. In her remarks, she said that SMC’s new facility was top of the line, specifically praising the simulation lab.

“This is an amazing space,” she said. “It’s just state of the art. … The investment that this community has made is unbelievable.”

Now that the building has been unveiled and students have begun to learn there, Mathews said he is looking forward to using SMC’s nursing facility to train the next generation of nurses in Cass County.

“The goal of this project was to create a facility that matched the quality of programming that we were already delivering,” he said. “We think the next 50 years of nursing and health education at Southwestern Michigan College is going to be even more exciting than the previous 50.”