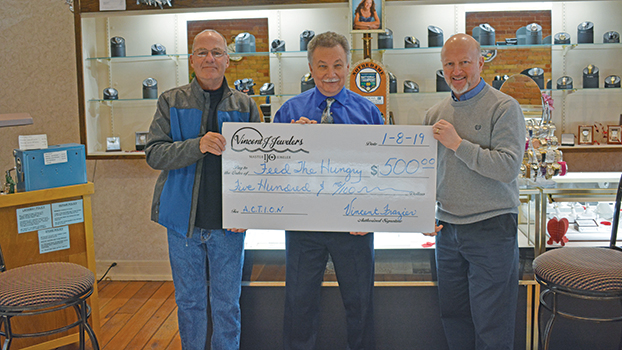 DOWAGIAC — Tuesday afternoon, Jim Frazier, owner of Vincent J. Jewelers in downtown Dowagiac, held a pair of simple shell pearl earrings in his hand, showing them off to a small group of people inside his store. Though small and dainty, Frazier said the studs would have a big impact on the Dowagiac community.

This week, Frazier presented a check to ACTION ministries and the “Feed the Hungry” food drive organized by C. Wimberley Automotive and ACTION ministries. The donation will go toward supporting the ministry’s food pantry, located on Main Street in Dowagiac, as well as toward paying for bimonthly mobile food pantry visits to the local community.

Throughout December, Vincent J. Jewelers sold earring sets for $10 each, raising $500 for the Feed the Hungry campaign. The donation helped push the campaign over its $20,000 goal, with Feed the Hungry raising more than $22,000 this year. The campaign is currently still taking donations. Vincent J. Jewelers is also still selling the earring sets and will continue to donate the sales of the sets to the campaign, Frazier said.

“I don’t donate to anything that is going to be bad for our area,” he said. “Our customers are local, and we want to give locally. … [Feed the Hungry] can help so many people in our community with this money.”

Organizers with the Feed the Hungry program said they were grateful for the donation. Lead organizer Jim Allen said he appreciated that Vincent J. Jewelers has donated to the program year after year.

“We are very grateful for the donation,” he said. “The fact that [Frazier] is using his business to help ours is something that I just like the idea of.”

As Frazier presented the check to both Neumann and Allen Tuesday, Allen said he wanted to thank both Frazier and the greater Dowagiac community for keeping Feed the Hungry alive, and allowing the program to have a successful 2018 campaign.

“The community has really rallied around this program in a way that has energized me,” he said. “Without this kind of support, we wouldn’t be standing here.”