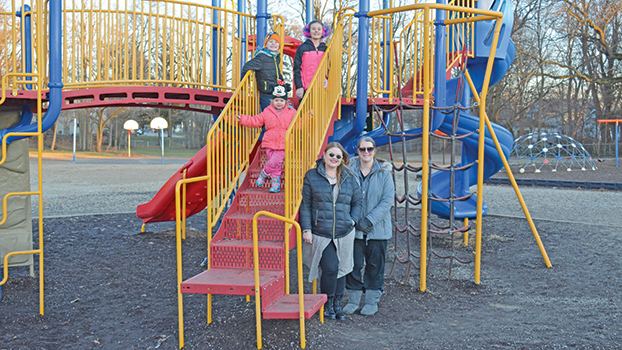 DOWAGIAC — When Patrick Hamilton Elementary School principal Heather Nash died late last month, her absence left a hole in the Dowagiac community that loved her. Now, those who knew her are working to repair some of that hole by keeping her memory alive.

The Patrick Hamilton Elementary PTO is currently raising money to buy a memorial bench in Nash’s memory. The bench will be placed in the elementary school’s playground, which PTO members said Nash was always passionate about improving for her students.

“This is a way of keeping her memory and legacy alive,” said PTO member Randi Taggart, standing on the very playground that the bench will eventually be placed. “This is something we want to do for her.”

“She did so much that you don’t even know all that she did,” said PTO member Amy Walker. “She knew the names and families of every kid in school. … Once you met Heather, you were friends with her. She cared and wanted to know who you were. She touched so many people.”

Describing Nash as bubbly, fun and loving, both Taggart and Walker said they hope that by placing a bench in her honor at Patrick Hamilton Elementary playground not only will they respect Nash’s memory, but that they can provide some comfort to the students and community members who loved her.

“She meant so much to these kids,” Taggart said. “If any of the students or the staff want to talk to [Nash] or talk about her, they can know that [the bench] will be there for them.”

The PTO’s current goal is to raise $700 for the bench. However, members said if they raise more money, they will be able to consider purchasing a bigger or a different bench model. Once donations are collected, Taggart and Walker said they expect to see the bench installed during the current school year.

“The community loved Heather, and they have been so supportive,” Walker said. “We loved [Nash], and she was a wonderful person and principal. Our kids loved her and miss her. … We want this bench to be here for them to remember her.”

Superintendent Paul Hartsig said he supports the project of placing a memorial bench in the Patrick Hamilton playground.

In the weeks since Nash’s death, Hartsig said district staff and students have been working to heal. This week, the staff has worked to put in place procedures to support students and faculty, such as having counselors available for students to talk to. Also, this week, the district gathered input from elementary school staff about how the district should move forward with addressing Nash’s vacancy as principal for the rest of the school year. Hartsig said that district administration is considering that input and will formulate a plan for the rest of the school year within the next week or so.

“We want to find a path forward that works best for the students and staff here,” he said. “We are still deeply saddened by [Nash’s] loss. We are determined to do what she would do, which was put kids first and give them the best education and environment we can provide for them.”

The PTO will be collecting donations for the bench until the end of the month. Donations can be made at Honor Credit Union or by mailing a check to or calling the Patrick Hamilton Elementary School at (269) 782-4450.