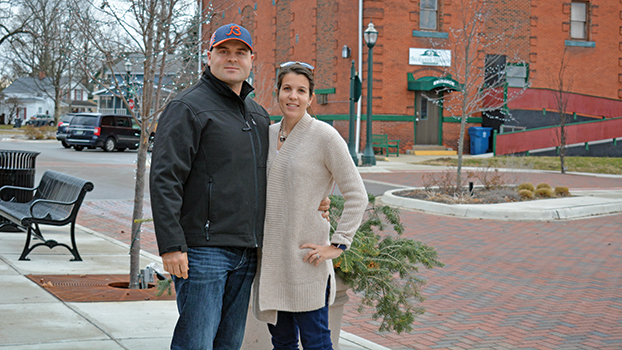 Dowagiac native Ben Behnke recently started one of the final legs of military flight school. Pictured is Behnke with his wife Sarah in downtown Dowagiac during a recent visit. (Leader photo/SARAH CULTON)

DOWAGIAC — Dowagiac native Ben Behnke has always dreamed of taking to the skies. From the time he was young, he would spend his days daydreaming about soaring through the air and taking flight. Now, after a lifetime of dreaming, he is making his fantasies of flight a reality.

Behnke, 31, entered into one of the final stages of flight school for the Army this week, beginning training to become a Flight Warrant Officer as a Blackhawk helicopter pilot Wednesday. He plans to complete flight school in June. He has been in the Army for nine years, serving in both Iraq and Afghanistan as a Cavalry Scout during that time.

“I’ve always wanted to be a pilot since I was a little kid, and the Army gave you the best transition to that because you don’t need a college degree. You can walk right in and become a pilot if you wanted to, and the Army can provide that,” Behnke said. “As a [Flight] Warrant Officer, my job is to know the aircraft inside and out and how to operate it best for the Army’s needs.”

Both Behnke and his wife Sarah said that the first stage of flight school, which Behnke completed late last year, was stressful and challenging, as Behnke was working long days and studying for hours each night at home. However, Behnke said he is excited to enter into his next stage of training, and both he and his wife said all the work would be worth it once Behnke completes flight school later this year.

“This is a dream come true,” Behnke said. “I’ve been working for this my whole life, and I’ve finally got it. I’m extremely happy. Every time I am up in the air, it feels like nothing else matters. It’s just me. Nothing is better than that feeling.”

“I’m super excited to see him follow his dream,” Sarah added. “We are kind of like a team. So, when he goes and does his training, I help out any way I can. Flight training is super stressful, but I’ll be happy to see him live his dream out.”

Behnke said he learned to love the sky at a young age from his grandfather, a WWII veteran who was fascinated with aircrafts. Even though he always wanted to fly, Behnke said he never truly believed that he would become a pilot until he was accepted into flight school in 2017.

“If you had told me when I was in high school that I would be a pilot, I probably would have passed out,” he said. “It just goes to show that you can achieve your goals and your dreams even from a small town. Your possibilities are endless. … You can do anything so long as you put your head to it. Don’t ever give up.”

Now that he is an adult finally fulfilling his dream of flying, Behnke said he is proud to be able to do that while also serving his country and making his hometown of Dowagiac proud through the Army.