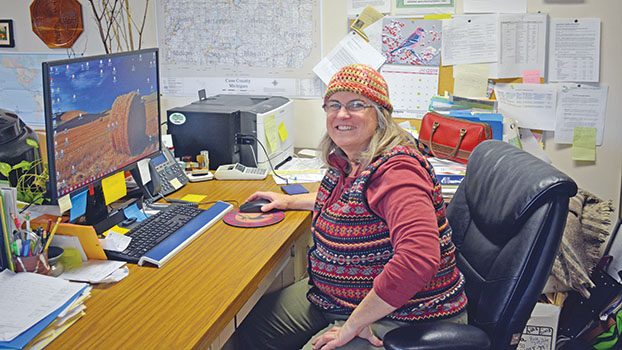 CASS COUNTY — Despite being in the midst of winter, over the last week many southwest Michigan residents discarded their hats, coats and gloves due to spring-like temperatures that have hit the area.

According to the National Weather Service, southwest Michigan and northern Indiana have experienced temperatures around 20 degrees higher than the average for this time of year, which is typically in the low 30s. Additionally, the area has had less snow than average.

Over the weekend and early this week, Dowagiac and Cass County reached temperatures in the high 40s.

“We have had strong warm area being blown in from the south and the west,” said Meteorologist Geoff Heidelberger. “That’s really where the warm air was coming from [Monday].”

Now, officials in Cass County are reacting to the unusually warm winter.

Over the past weekend, Cass County Parks Director Scott Wyman said the parks had increased traffic for this time of year. He said he saw people out hiking, biking and golfing — activities that are typically reserved for the summer months.

“It’s just kind of crazy weather,” he said. “People are definitely taking advantage of it.”

However, even though residents have been enjoying the warmer weather, it has had negative consequences for certain industries and outdoor activities such as skiing, ice fishing and sledding, Wyman said.

“There are departments that rely on that winter revenue, and I feel bad for those winter enthusiasts who really look forward to this time of year,” he said. “For the people like myself, who enjoy those winter months, it’s just not the same. Things are changing.”

“Cass County is a community that loves recreation and winter recreation,” added Korie Blyveis, administrator of the Cass County Conservation District. “There has been no sledding at all. I think that has hurt our community.”

Outside of recreation, the warmer weather could have an impact on soil erosion, as the increased rain has put pressure on the county’s drainage systems, Blyveis said.

“That concerns me, because when someone is out doing [an outdoor construction] project, the ground is soft, and it doesn’t take much to start tearing up the soil,” she said. “The next thing you know, you can have created an erosion wash.”

To combat this problem, Blyveis encouraged residents to put down boards or plant grass mix with winter rye on exposed soil when working on projects.

One thing residents of southwest Michigan do not have to worry about just yet is crops or agriculture being affected by the weather, Blyveis said. At this point, the trees are two weeks ahead of their blooming schedules, but that should not cause harm to the upcoming fruit season, she said.

“So long as we don’t have a prolonged, really warm weather, everything should be normal,” Blyveis said. “Most plants have reached their required ‘chilling hours,’ which they need to be healthy.”

Though county officials have been keeping the consequences of the warm weather in mind and southwest Michigan residents have been enjoying spring-like temperatures, officials said to not get too attached.

This week, a cold front will come through the area that will drop temperatures back toward the seasonal average, according to Heidelberger.

“That will seem cold because we haven’t had cold in a long time,” he said.

Blyveis also warned residents to keep in mind that harsh winter weather and heavy snows could still come at any time.

“People need to be prepared,” she said. “The winter has been so mild that people have not been thinking about it, are not acclimated to the cold weather. … We might still see those storms and people should be prepared.”