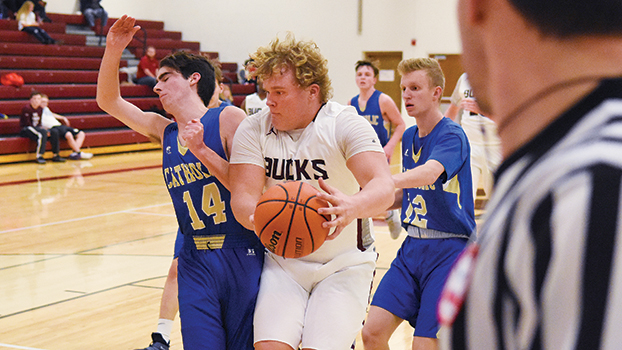 BUCHANAN — Veteran Buchanan boys basketball coach Reid McBeth has seen his teams get off to better starts than his current squad.

But despite the 3-5 overall record and the 1-3 mark in the BCS Athletic Conference’s Red Division, McBeth feels his team can turn things around if they can address some issues.

The Bucks went 2-5 before the Christmas break, beating Red Division rival Bridgman 59-43 and Constantine 63-61 in a non-conference contest.

Niles, Coloma, Comstock, Parchment and arch rival Brandywine all got the better of Buchanan before the two-week break for the holidays.

All five of the Bucks’ losses have been 10 points or less.

Using the break to work on the early season problems, the Bucks returned to action Monday night and defeated Lake Michigan Catholic 69-47 in a BCS non-divisional game.

Some of the issues the Bucks had in the first seven games reared their ugly head in the opening quarter, but once Buchanan shook off the rust, they were able to pull away from the Lakers.

“The first game back from break is always ugly,” McBeth said.

Things that Buchanan worked on included taking better care of the basketball and getting the ball inside more.

Buchanan has a huge advantage in the paint with 6-foot-10 sophomore Logan Carson, who exploded for a game-high 28 points against Lake Michigan Catholic Monday night.

The Bucks can also go inside with Brad VanOverberghe and Cam Lorance, while it can run the floor with its athletes Isaiah Rimpson, Darius Griggs and Gavin Fazi.

Using their physical advantage will be a key for the Bucks moving forward.

“We talked a lot about getting the ball inside,” he said. “We have a lot of big bodies in there. I think our kids are starting to realize that. Early in the game we were happy settling for threes. They do not have to be our first option. We get those later in the possession. We need to give our guys a chance inside to get some looks.”

The Lakers opened up the game with back-to-back 3-pointers to jump out to a 6-0 lead on the Bucks.

Buchanan went inside to finally get on the scoreboard as Carson, VanOverberghe and Lorance were able to muscle their way to the basket.

The Bucks outscored the Lakers 18-5 the remainder of the opening quarter to take an 18-11 lead, while they stretched to 28-18 by halftime.

Carson scored 10 points in the opening quarter and finished the first half with 16 points.

The Bucks put the game away in the third quarter as they outscored Lake Michigan Catholic 23-12 to open up a 51-30 advantage through three quarters.

“We have a lot of big bodies we can throw at you,” McBeth said. “We have to take advantage of that. At the end, Darius has a lot of athleticism. You can see we have a good mix of guys who can move, but we really have to focus on throwing the ball inside. That has to be our bread and butter.”

Griggs also reached double figures for Buchanan as he scored all 14 of his points in the second half. Fazi and Lorance both finished with eight points.

Jake Koenig and Michael Markoch combined for 29 of the Lakers’ 47 points.

Buchanan is back in action Friday night as it hosts New Prairie (Indiana) in another non-conference contest. Tipoff is scheduled for 7:30 p.m.