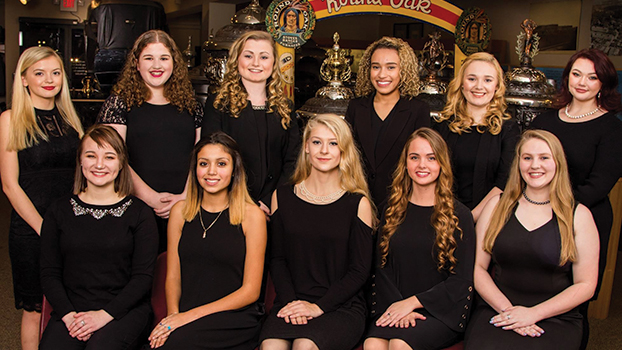 DOWAGIAC — This Saturday, 11 young women from Dowagiac will take the stage at the Dowagiac Middle School Performing Arts Center dressed in their best formal wear to compete for thousands of dollars in scholarships.

The annual Miss Dowagiac Scholarship Pageant will take place at 7 p.m. Saturday at the Dowagiac Middle School Performing Arts Center, 57072 Riverside Dr. Doors will open at 6:30 p.m. Tickets, priced at $15, remain on sale at the Chamber of Commerce office, 200 Depot Dr., through Thursday. On the night of the pageant, tickets will be available at the door starting at 6 p.m.

This year will be the 80th Miss Dowagiac Pageant, and organizers said they are excited to celebrate the milestone.

“This is pretty incredible,” said Tracy Urbanski, acting director of the Miss Dowagiac Scholarship Pageant. “I think it says a lot about the organization and a lot about the community that supports us. I think it is a great milestone for a small community.”

This year’s theme will be “80 years of empowering women,” and to fit with the theme, the set will be decorated in a ballroom style, echoing back to the 1930s. Over the past 80 years, Urbanski said that the pageant has lived up to its standard of empowering women by teaching young girls interviewing skills, providing contestants with scholarship awards, taking them out of their comfort zones and giving them the confidence to empower themselves.

“This is about young ladies setting their goals. We have had future doctors, business people, teachers and more in past pageants,” Urbanski said. “Ultimately, our goal is to make sure that these young ladies are able to succeed in their futures, help them through their higher education and to help them not settle and see that they have so much potential.”

As the contestants prepare for this weekend’s pageant, Urbanski said she hopes that they feel the empowerment of past contestants and that they know they are making a mark in Dowagiac’s history.

This year’s contestants include:

• Hessen Ayers, 18, of Dowagiac Union High School. She is the daughter of Susan and Tim O’Brien and Richard Ayers. Her school activities include being an officer of the student senate, a member of the national honor society and being a part of the yearbook committee. Her future goals include representing children in court.

• Emily Luthringer, 18, of Dowagiac Union High School. She is the daughter of Kelli and Mark Luthringer. Throughout high school, she has been involved in the Dowagiac Chieftain Marching Band, the Greenhouse club, FFA and the NTHS. Her future goals include going to Michigan State University to become an agricultural science teacher.

• Emily Potter, 17, of Dowagiac Union High School. She is the daughter of Melissa and Timothy Craig and Rhonda and Patrick Potter. In school, she has participated in the play, musical and choir. After school, she plans to attend Central Michigan University to study psychology and music.

• Jacquelynn Winchester-Jones, 17, of Dowagiac Union High School. She is the daughter of Michele Winchester and Thomas Jones. She has been awarded high honors and outstanding academic excel fence in the classroom for all four years of my high school career. After school, she plans to study business management at a four-year university.

• Sofia Rosales, 17, of Dowagiac Union High School. She is the daughter of Jesus and Beatriz Rosales. In high school, she is a member of the student senate and the Chieftain Heart. Her future plans include pursuing a degree in business.

• Alexandria Marquart, 17, of Dowagiac Union High School. She is the daughter of Leann Marquart. Her school activities include: being a three-year varsity soccer player, being a three-year track and field athlete and being a two-year National Honor Society member, serving one year as president. After graduation, she plans to attend the University of Michigan to pursue nursing with hopes of becoming a neonatal nurse practitioner.

• Grace Clark, 18, of Dowagiac Union High School. She is the daughter of Shelly and Lincoln Clark. Her school activities include: playing volleyball, basketball, soccer, being a part of National Honors Society, chamber choir, jobs for Michigan graduates, and participating in the musical “Beauty and the Beast.” In the future, she plans to attend college to pursue dance and a career in the medical field.

• Dianna DeLong, 18, of Dowagiac Union High School. She is the daughter of Brian and Tami DeLong. In school, she was a part of the student senate, participated in the high school’s musical production for three years, was a member of the Chieftain heart, worked on the yearbook committee, completed the Allied Health program and was accepted into the ambassadors’ program at the Van Buren Technology center her junior year. After graduation, she plans to attend Bethel college where she has been accepted into the nursing program. She plans to specialize in pediatric care.

• Sydney Reese Podemski, 17, of Dowagiac Union High School. She is the daughter of Leah Carpenter and John Podemski. In school, she participated in the chamber choir, honor choir, the musical and AV club. After graduation, she plans to study political science and journalism at Southwestern Michigan College and George Washington University.

• Marissa Richey, 17, of Dowagiac Union High School. She is the daughter of Tara Starrett. Her school activities include Rotary Interact Club, softball, basketball, Leo’s club, Business Plan Management team and the Educational Talent Search. Her future plans include traveling to Fort Jackson, South Carolina, to complete basic combat training to be a unit supply specialist in the Army. She also I will also hope to take college classes on base to eventually become a field surgeon.

DOWAGIAC — A local assisted living facility is opening up its doors to the public this month and asking them... read more

Blossomtime announces Blessing of the Blossoms