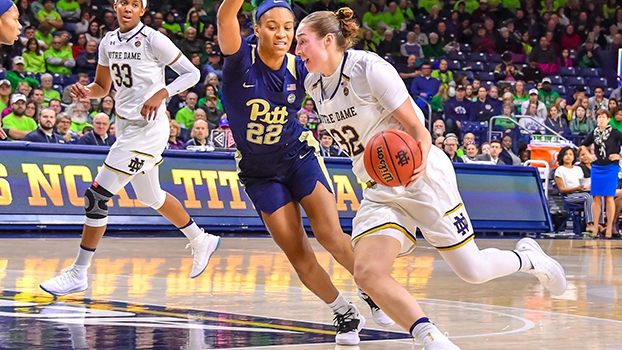 Jessica Shepard led the Irish in scoring for the first time this season, registering 19 points. She also tied her season high in assists with six. (Photo courtesy the University of Notre Dame)

All five Irish starters finished in double figures for the fifth time this season, as Notre Dame shot over 50 percent for the seventh consecutive game (.548).

Jessica Shepard led the Irish in scoring for the first time this season with 19 points to go along with her seven rebounds, six assists and two blocks. Arike Ogunbowale doubled her previous high in career assists with 12 this afternoon, to go with her 13 points. Brianna Turner led the squad in rebounds and steals with nine and three respectively, to go with her 11 points.

Notre Dame found itself down 8-2 in the early minutes, before finding its offensive rhythm to finish the last seven minutes of the quarter outscoring Georgia Tech, 16-7. Jessica Shepard led the team in scoring for the period with eight points, giving Notre Dame an 18-15 lead.

The Irish started the second quarter on an 8-0 run, which extended into a 17-4 advantage. Notre Dame ultimately outscored the Yellow Jackets 21-7 in the quarter, limiting its opposition to just 3-of-14 shooting in the period to take a 39-22 advantage into the half.

The Irish registered 30 of its 39 halftime points in the paint, led by 12 points from Shepard and eight points from Brianna Turner. However, the most impressive stat by half, 17 assists on 17 made field goals for the Irish.

In the third, Notre Dame shot out of the gates again, jumping out to an 11-4 start. The Irish finished the period making seven of its last nine shots, but four late turnovers resulted in a fairly even-scoring quarter. Thus, the Irish took a 58-39 lead into the fourth quarter.

There, the Irish continued its theme for the game, starting the fourth on a 7-0 run, five of which were scored by Ogunbowale. Notre Dame extended the run to 16-5 before rolling to the 76-55 final.

Player of the Game

Shepard led the team in scoring for the first time this season with 19 points on 8-of-10 shooting. The senior also collected seven rebounds, two blocks and tied her season high in assists with six.

Stat of the Game