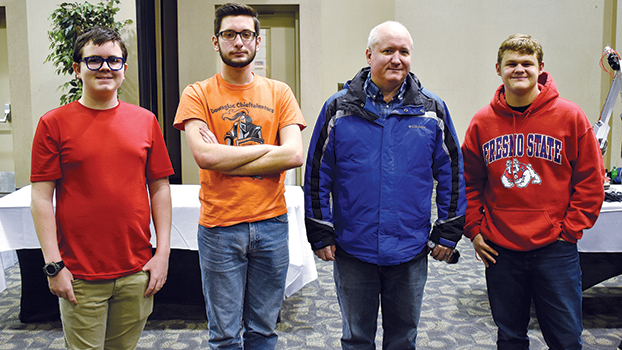 BENTON HARBOR — The 26 youth teams participating in this year’s FIRST Robotics Competition will be taking their skills to new heights during this year’s challenge, Destination: Deep Space.

On Saturday, high school students across southwest Michigan, including those in Niles, Dowagiac, Edwardsburg and Cassopolis, spent their morning at Lake Michigan College’s Mendel Center for the annual competition kickoff.

Throughout the morning students heard from experts in the field, looked at some modern technology displays and got the details on their latest challenge, which was announced via a global broadcast. Destination: Deep Space takes place on the fictitious planet Primus. For the competition, teams must build a robot that can place multiple hatch panels on a rocket, load fuel and return to a safety habitat, within the time frame. For each task, teams can rack up more points.

Since its 2008 inception in southwest Michigan, FIRST robotics has not only given students the opportunity to build high-tech robots that can do everything from chuck rubber balls to maneuver autonomously, and it has also given them a chance to learn team building skills and prepare for careers in the field.

The competition, recognized on an international level, sees crowds of sports stadium proportions, enticing many across the globe to get excited about, science, math and the future of technology.

For the next six weeks, students will be putting their heads together to devise a robot that can exceed the challenge’s standards. As they began brainstorming Saturday, a number of teams said they hope to build something cutting edge.

Michael Symonds is part of Dowagiac’s Chieftainators robotics team. Symonds is a senior at Dowagiac High School and has participated in the FIRST competition for the past four years, serving as the team’s head engineer.

Symonds said he likes the thrill of building a product from the ground up.

“Going from the design process to the actual execution is incredible to see that your robot is actually doing what you want it to do,” Symonds said. “I’ve definitely learned how to better handle time constraints. Six weeks may seem like a long time, but it’s not when you are building a robot to do a task.”

Watching his team build on what they have learned every year and improve is the best part of FIRST, he said. This year, the team said they have their sights set on getting to compete in the state-wide competition and then onto the national tournament.

Niles team Ground Zero is also hoping to make new strides during this year’s FIRST challenge. Last year, the team narrowly missed their chance to move on to state, getting a ranking only slightly under what was needed to advance.

“We have some things that we are going to improve upon,” said David Heiser, a Niles High School senior. “[We want to make] a beefier robot. We want to work on our programming [to make it] more autonomous so that we can do more in the first three seconds of the game.”

During the kickoff, Congressman Fred Upton addressed the crowd and relayed how much students could gain from the program.

“It’s exciting for me to see this thing happen,” Upton said. “FIRST robotics there is nothing higher than that. You talk to your universities and the talent they are looking to recruit. You talk to businesses – this is magic.”

Nathan Chupp, of South Haven, the kickoff coordinator who helped establish the southwest Michigan FIRST, said this year’s challenge had been adapted to utilize technology, right down to seeing a model of the playing field.

“They are going to get a Google cardboard (virtual reality goggles) and a kit of parts,” Chupp said. “They can hook it up to their phone and see the [playing] field virtually. They will be able to see it virtually when they get home.”

Chupp currently works as a test engineer technician at Leco, a company that makes laboratory equipment. He credits his involvement with FIRST, when he was a growing up in Edwardsburg, for helping him to kick-start his career.

“I have my job because of my involvement with FIRST, where I am from,” Chupp said.

A lot of local companies take an interest and invest in the competition through teams sponsorships, Chupp said. For some students, the competition helps them make connections for internships, scholarships and even careers.

Students also apply a variety of skills outside of STEM to make their team successful.

“There is a marketing side of the team, a web design, graphics design into building the robot,” Chupp said. “The best thing about FIRST is that it embraces professionalism.”

No matter where the competitors end up this year, Symonds said he looks forward to all they will learn in this year’s challenge.

“You can do a whole lot of things with robotics,” Symonds said. “There is the business part. There’s the leadership aspect. There’s teamwork. Even if you don’t go into engineering, you are still going to use it in your day to day life.”

To learn more about the FIRST Robotics Competition, visit firstinspires.org/robotics/frc.