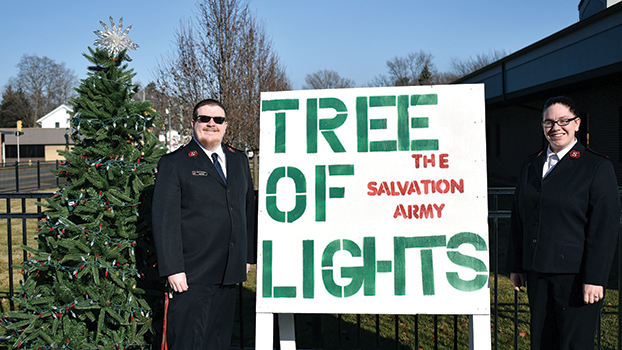 NILES — Over the course of the holiday, the red lights on a Main Street Christmas tree have been inching their way to the top of its boughs.

The decorations signify the Niles Salvation Army is moving closer to the Tree of Lights fundraiser campaign goal of $85,000. The deadline to meet that goal is Jan. 31. In this final stretch, the charity organization is hoping the community can help fill the gap.

This holiday season, bell ringers from across Berrien and Cass counties rang bells to collect funds for the cause.

Thanks to their efforts, the Niles Salvation Army has reached nearly 72 percent of its goal for the campaign, bringing in about $61,000.

The annual fundraiser helps to provide about 75 percent of the Niles Salvation Army’s budget. Proceeds from the campaign will support aid programs for residents of Berrien and Cass counties.

Lt. Joseph Hixenbaugh said while the organization hopes to reach this year’s goal by the end of the month, he said he was proud to see more volunteers stepping up to help out.

Joseph said he attributes the uptick in volunteers this year to the inception of an online sign-up for volunteer shifts.

“That really did help this year. It got us some new volunteers for bell ringing and reconnected [us] with some old volunteers we had not seen,” Hixenbaugh said.

Joseph said he believes that making the campaign more visible this year with the Tree of Light helped to pique interest. The tree will return to track progress for next Christmas’ campaign.

“If we don’t make any of that, there are some areas of the budget that we will be trimming a little,” Hixenbaugh said. “We won’t be cutting any of our programs or services or anything.”

Lt. Kendra said reaching their goal will help the Niles Salvation Army extend its efforts to aid residents this year.

“It would allow us to help more families,” Kendra said.

“A monetary donation can go a long way to help a number of different families,” Hixenbaugh said.

The couple said they were grateful for what the community has donated so far. Already, Joseph and Kendra are strategizing for ways to fundraise for next Christmas.

“It’s an all-year-round process,” Hixenbaugh said. “We may have not reached our goal [yet], but we reached a goal in which we can comfortably still operate.”