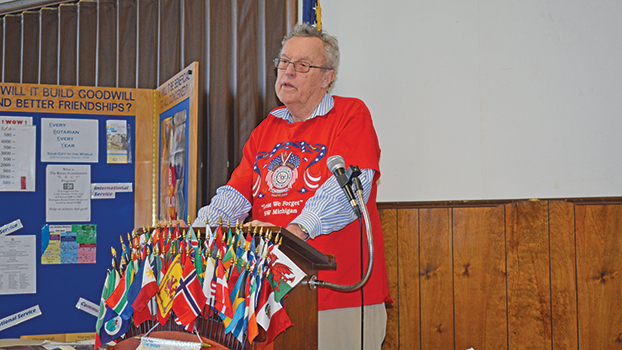 DOWAGIAC — Thursday, the Dowagiac Rotary Club was given the opportunity to gain an appreciation for some of the military’s most overlooked service members — ones that walk on four legs.

Gary Lulenski, a retired St. Joseph doctor who served as a medical commander during the Vietnam War, presented to the Dowagiac Rotary Club Thursday. His presentation, which he has given more than 50 times at high schools, colleges and elementary schools, focused on working military dogs, which he called war dogs. The presentation touched on what war dogs do, their history and their continuing importance to the military today.

War dogs have been long used in combat, with the earliest recorded use being in 600 B.C. by Alyattes of Lydia against the Cimmerians. Over the centuries, war dogs have been used for many different purposes including fighting, communication, medical research, guarding, and the tracking and detection of explosives.

According to Lulenski’s presentation, war dogs became popular in the U.S. during the Vietnam War, during which the dogs saved the lives of an estimated 4,000 soldiers through explosives detection.

War dogs are still widely used today, with all five branches of the military able to use war dogs.

“War dogs today are still a tremendous use to our soldiers,” Lulenski said during his presentation. “This is a great program.”

Each war dog is trained from when they are puppies with their individual handlers. The dogs learn tasks specific to the branch of the military they will be working with. For example, dogs working in the Air Force often learn to jump in tandem with their handlers. Once the dog’s term of service is done, many handlers keep their war dogs as personal animals, Lulenski said.

As Lulenski worked as a medical commander in the Vietnam War, he has never personally worked with a war dog as a trainer or handler. However, he became interested in the topic after hearing about the dogs when he entered the military, he said. His interest led him to do extensive research on the subject and talk to soldiers who shared their stories of the war dogs with him.

“Everything I heard about [war dogs] was about how wonderful they were and how our soldiers felt so much more comfortable if they just had a war dog with them,” Lulenski said. “I just became very fascinated.”

Through his presentations, Lulenski said he hopes that people will become as fascinated with war dogs as he is and that he hopes he can bring awareness to the service that war dogs provide for the country.

“The war dog program has been a fantastic benefit to our soldiers, and I am happy to talk about it,” he said. “We still need [war dogs] now, and we will continue to need them as long as we have troops in Iraq or Afghanistan.”