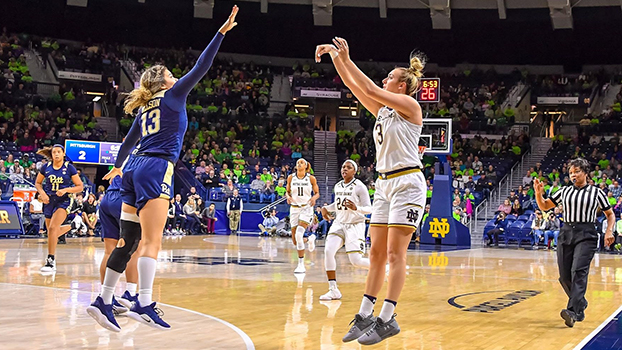 NOTRE DAME, Ind. – The No. 2 Notre Dame women’s basketball team made an emphatic statement in its ACC opener, defeating Pittsburgh, 100-44, inside Purcell Pavilion on Thursday night.

Marina Mabrey, who exited the game after the third quarter, finished with a game high 20 points on 8-of-14 shooting, including a 4-for-9 performance from three-point range.

Furthermore, Thursday marked the second straight game in which a milestone was achieved after Jackie Young joined the 1,000 career point club, knocking in 16 points tonight. Young becomes the 40th member of the club, as all five starters now boast over 1,000 career points.

“It’s great to get out the first game (of conference play) and really set a tone for the ACC,” Karen & Kevin Keyes Notre Dame head coach Muffet McGraw said. “We’re going to take it one game at a time, but it’s important for us to play like that every game.”

Notre Dame’s defense undoubtedly left its mark in the first half, limiting Pittsburgh to just 14 points. It marked the program’s second-fewest first half points allowed in an ACC contest, previously allowing just 11 against Virginia Tech in 2016.

The Irish recorded two separate 21-0 runs, with one occurring in each the first and second quarters. Notre Dame held Pitt off the board for a nearly seven-minute stretch from 9:11-2:50 in the first quarter, boasting a 32-10 advantage after the opening period. All five starters had scored after the first, as the Irish shot 12-of-20 from the field, notching nine assists along the way.

The Irish went on to outscore Pitt 28-4 in the second, starting the period with five straight three-point plays, ultimately totaling 15 assists on 21 made field goals heading into the half. By the midway point, Ogunbowale led with 17 points, followed by 14 from Mabrey.

In the fourth, Vaughn sent the crowd home with free Big Mac coupons after notching the team’s 89th point, while Nixon put the Irish into triple digits with the 100th. It marked the fifth time this season, the Irish reached triple digits.

Stat of the game

Notre Dame limited Pittsburgh to just 14 first half points. It marked the program’s second-fewest first half points allowed in an ACC contest, previously allowing just 11 against Virginia Tech in 2016.

• Notre Dame now leads the overall series, 27-3, against Pittsburgh, including a perfect 13-0 mark at home.

• Irish move to 78-3 in ACC play since joining the league at the start of the 2013-14 season. Notre Dame also has won 52 consecutive home conference games dating back to its BIG EAST days in February of 2012.

• With 16 points tonight, Jackie Young surpassed the 1,000 career point mark. She becomes the 40th player in program history to do so.

• All five starters now boast over 1,000 career points. Only Notre Dame and Marquette can claim that feat.

• Mabrey led the Irish in scoring with 20 points on 8-of-14 shooting. The senior tied her season high of four made threes, going 4-for-9 from beyond the arc.

• Mabrey recorded her third 20-point scoring game of the season.

• Turner notched three blocks against Pitt and has now totaled 14 over the last four games.

• Entering Thursday’s game, Notre Dame’s season best scoring run of 21 points came against Binghamton on on Dec. 16. The Irish matched the 21-0 scoring run in both the first and second quarters.

Up next, the Irish travel to Atlanta for the first conference road contest of the season when they clash with Georgia Tech on Sunday, Jan. 6, at McCamish Pavilion. Tip off is scheduled for 3 p.m. ET, airing on Raycom Sports/Regional Sports Networks