NHL puts on a show at Notre Dame Stadium 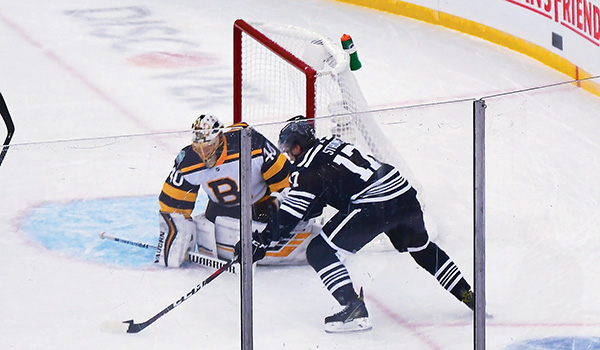 NOTRE DAME — The NHL Winter Classic lived up to my expectations at Notre Dame Tuesday afternoon.

It was great being able to check off two boxes on my “bucket list” of professional events to cover.

Having never covered a hockey game before, I was hoping the game would be close and exciting.

The Chicago Blackhawks and Boston Bruins delivered with a 4-2 game, that the Bruins rallied to win with a pair of third period goals.

Growing up, I always liked the Bruins. I am not sure why I was drawn to a team out of Boston, other than the fact I liked Bruins defenseman Bobby Orr.

Back then, hockey was a rough and tumble game played by men who did not seem to fear anything. There were plenty of fights on the ice and there were colorful characters off of it.

Today’s game in no way resembles what I watched as a child.

Today’s game is more about skating and scoring and less about mixing it up on the ice.

I have to admit, I would have loved to see a fight between the Blackhawks and Bruins, but the way the game moves up and down the ice these days is quite impressive.

There is still plenty of solid checking and players being taken into the boards to please those fans who like a physical game, but it truly has evolved into a sport where being quick and athletic is more important than being big and physical.

The atmosphere surrounding the Winter Classic was unbelievable.

The weather was nearly perfect for both the games and the players. In the mid-30s to begin the game allowed for great ice to skate on and the sellout crowd of more than 76,000 fans was into the game from the start right up until the final buzzer.

Football stadiums do not often make the best hockey arenas, but for most, Notre Dame worked to perfection.

One of the players interviewed after the game said that they liked this Winter Classic because they felt like they were closer to the fans and were able to feed off that emotion.

The Winter Classic at Notre Dame was the second largest crowd of all-time. The biggest crowd to see the outdoor hockey game came in 2014 when the University of Michigan hosted the game at the “Big House” in Ann Arbor.

It has been a big couple of months for Notre Dame.

First it was Garth Brooks, who played in worse weather than the National Hockey League players did, back in October.

The Winter Classic came off without a hitch and now sports fans can begin the countdown to the US Senior Open at Warren Golf Club in June.

I expect plenty of more sports and entertainment events coming to Notre Dame in the near future. Now that the lid has been taken off adding such things to the iconic stadium, we surely can expect people to come calling to use it.