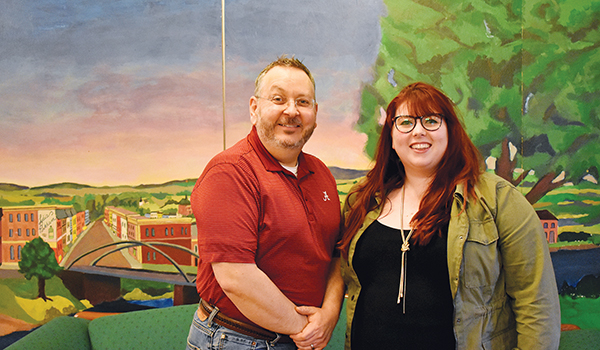 NILES — After more than a year of planning, a merger to unite the Four Flags Area Chamber of Commerce and Southwest Michigan Economic Growth Alliance is complete. As the nonprofit looks to the future, it will seek to find ways to better serve the local business owners that make up its members.

Starting Jan. 1, the chamber partnered with SMEGA to form the Greater Niles Area Chamber of Commerce. The new name is a testament to how the new organization will serve more than Niles residents, including Buchanan, Bertrand Township, Niles Charter Township, Galien, Three Oaks and Cass County. The organization is also reaching across the state line and has partnered with the South Bend Regional Chamber for some contract services. The South Bend chamber will help to provide administrative and support services.

With residents shopping and working across Berrien and Cass counties, as well as over the state line in Indiana, Jeff Rea, the president and CEO of the South Bend Regional Chamber, described the partnerships as “synergistic.”

“The resource has been somewhat limited in the past by the amount of funding,” Rea said. “Funding only allows you to so much. The board made what they felt was a smart business decision and tapped into a pool which will allow the Greater Niles Chamber to look and feel greater.”

Celebrating its 100th anniversary this year, the Four Flags Chamber was formed with the intent of advocating for local businesses by providing them with networking opportunities and resources. SMEGA, which formed in 1982, sought to concentrate on bolstering local economic development in Berrien and Cass counties.

“About a year ago, the leadership for the two organizations began huddling and saying, ‘You know a lot of things we do are pretty similar and would there be a chance if we came together to deliver an even higher level of service to the business community?” Rea said. “So, it was kind of the impetus of pulling them together, which is finding those efficiencies.”

One notable change is that the merger has inspired a new location. The partners are working to vacate the former chamber building, 321 E. Main St. The new office location will be inside Niles City Hall, located at 333 N. Second St., Suite 302.

Members were notified of the merger and sent a list of facts and information detailing the partnership. Rea said if members notice any changes, he hopes they are improvements to services.

Membership costs are expected to stay the same “right out of the gate,” Rea said. Though, Rea said, the partners will likely reassess expenses soon. Due to the consolidation of resources and costs, there is a possibility that membership costs could end up costing less, but that will be determined likely within the next year, Rea said.

As far as the contract with South Bend, Rea said Niles leaders and residents would remain the face and voice of the organization. He said the South Bend chamber would primarily provide back-office services and hopefully extend the Niles organization’s overall presence in Michiana.

Rea said he looks forward to working with leaders across state lines to better the entire Michiana business community.

The Greater Niles Chamber of Commerce is available at (269) 683-1833. A new website to that will consolidate nilesmi.com and southwesternalliance.com will be available at greaternileschamber.com.