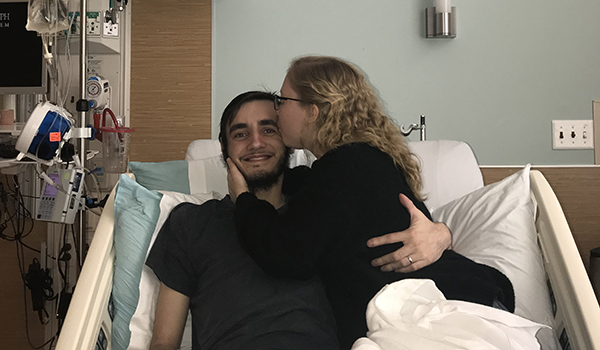 EDWARDSBURG — During the three years she has been dating Dylan Anderson, Rachel Dobransky has noticed how people act around her boyfriend: Confused, reserved, distanced, uneasy, and perhaps uncomfortable. It is difficult for her to see those kinds of reactions, though they’re something Dylan has come to know too well in his life.

Dylan, now 20 years old, was born with Cystic Fibrosis, a genetic disease passed from parents that causes infections and mucus buildup in the lungs. The mucus buildup makes it hard to breathe, to gain weight and to accomplish otherwise simple tasks. But for Rachel and Dylan, one of the most notable and consistent difficulties is the misunderstanding surrounding the disease. People Dylan encounters don’t always know why he has to spend so much time in the hospital, or why it’s hard for him to work, or even why he has to use a motorized scooter at the grocery store.

Recently, Rachel wanted to do something about the misunderstanding surrounding Dylan’s disease. It started simply as a fundraiser with a few jars at local gas stations to raise a little money because Dylan can’t work, but money was not her main concern and was not the solution to the real underlying difficulty. The better solution was awareness.

“I just want people to be aware,” Rachel said. “I want the community to show him that his life is good.”

Rachel does not have a big platform, or an organization, or even a real fundraising effort of any kind. What she does have is a voice and a deep concern for educating her community about the toll CF takes on Dylan.

“I just wish people knew about the illness they can’t see. You never know what they’re going through,” she said.

CF is a rare disease. Both parents have to carry the gene in order for a child to have it, and not all children in the family will get the disease. Dylan has two siblings, but he is the only one in his family to have it. While he’s grown up with the disease, Dylan said, “Every year I can feel the difference in how I breathe.”

Although some people with CF are eligible for lung transplants, Dylan’s case was not deemed serious enough for one. Being ineligible for a lung transplant does not change the fact that Dylan has to spend three weeks to a month three times a year in the hospital to get his lungs cleared.

“I can’t really get a job, I can’t really go out with friends often because it’s hard for me to breathe and I have to have help getting around,” Dylan said.

Dylan’s physical limitations and frequent extended hospital stays have made it difficult to find consistent employment, let alone do things he enjoys, like working on his car or doing physical activities with his friends. Even so, Dylan has learned to cope with the strains and limitations. He only wishes people knew about them.

“Don’t always judge a book by its cover. People seem fine and normal, but that doesn’t mean they’re not going through sicknesses,” he said.

Sympathy or pity do not interest Dylan or Rachel, however. Awareness, education and understanding are their desires, for Dylan and others like him. Disease and illnesses are difficult, but lack of awareness only adds to the difficulty. Whether it’s CF, cancer, or any other form of ailment, a community that knows and comes beside to say, “We are with you,” can make all the difference.

At least it does for Dylan, a lifelong resident of Edwardsburg. He and Rachel, also from Edwardsburg, know the kind heart of their community. They hope speaking out more about CF will benefit Dylan, as well as others.

“If you see Dylan struggling, don’t be scared help, or ask how we’re doing,” Rachel said.