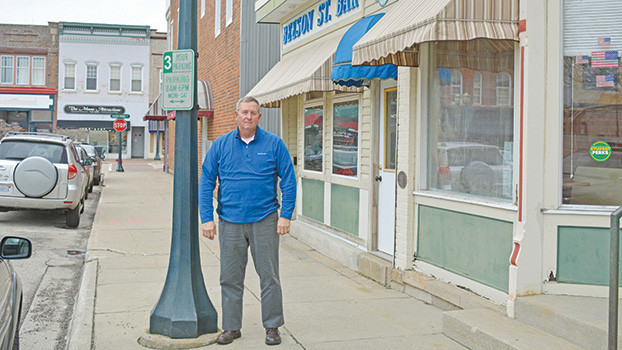 Former sheriff’s captain and Dowagiac police chief Tom Atkinson has retired from his position at SMC. He is pictured in front of Beeson Street Grill. (Leader photo/SARAH CULTON)

DOWAGIAC —  After nearly 50 years serving the people of Dowagiac, resident Tom Atkinson packed up his office at Southwestern Michigan College Friday as he set forth into the next stage of his life — retirement.

Atkinson retired last week after six years serving as chief of staff to SMC President David Mathews and overseeing campus security. Prior to that, he served 26 years as captain and commander of the Major Crimes Task Force at the Cass County Sheriff’s Office and 17 years at the Dowagiac Police Department, serving 14 years as police chief and three as director of public safety.

In his many positions over the years, Atkinson said he has a lot to look back on and be proud of — from seeing the inception of the Major Crimes Taskforce that still exists in the county today to improving security at SMC. However, he said the accomplishment he is most proud of is that he was able to serve his hometown and his county for five decades.

Starting when he was just 18 years old, Atkinson said he never intended to remain in law enforcement for the majority of his career. Initially, he wanted to be a conservation officer. However, after a year or two of work, he said he fell in love with the sheriff’s office because he knew he could better the community through his work there. During his time at the sheriff’s office, he graduated from National FBI Academy in Quantico in 1984 and worked to improve community relations with the sheriff’s department.

“One time a deputy said to me, ‘why would you want to be a conservation officer when you can chase bad guys who really hurt the community. Wouldn’t that be better than chasing a poacher?’” Atkinson recalled. “I thought that he was right. … I was very fortunate to work there.”

“It was appealing, being able to work in your hometown. It was like coming home,” Atkinson said.

Having lived and worked in the Dowagiac community for so many years, Atkinson said it made him better at his job and made his work more rewarding.

“You need to live in the community that you serve,” he said. “You connect with people. People see you, they trust you, and they are willing to talk to you. … You have to be part of the community. It is all about relationships.”

He added that he would never have made the connections he did or have had the same experiences had he not chosen to serve his community through his work. For example, he met his now wife, Cass County’s Chief Judge Susan Dobrich, while on the job.

Now that he is retiring, Atkinson said he plans to travel and spend time with family. However, he still plans to work for the community in his retirement, through serving on the boards of United Way of Southwest Michigan and the Lewis Cass Intermediate School District.

“Like every retired person, I’m going to do the things I didn’t have time to do when I was working,” he said. “I want to see what else is out there.”

If there are any aspiring law enforcement officials out there, Atkinson said his most significant piece of advice is to care about the community you work in.

“What you need to do sometimes is give back to your community,” he said. “Dowagiac has been a great place to grow up, live and have a family. … If you are going to stay, give back.”