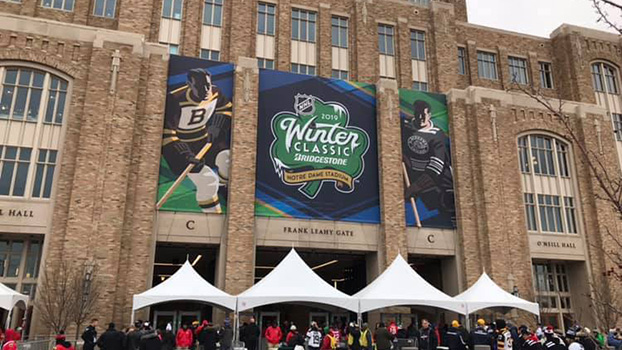 Third period: 32.8 — Brad Marchand corrals a loose put and scores an empty net goal to seal for the victory for the Bruins.

Boston will take a 4-2 win over the Blackhawks, thanks to a pair of power play goals by Bergeron at Notre Dame Stadium.

Third period: 9:40 — For the first time today, the Boston Bruins are out in front as Sean Kuraly scores to make it 3-2 Bruins with 9:40 remaining in regulation.

Third period: 10:00 – Midway through the third period and there continues to be plenty of action on the ice.

Third period: 15:58 — Boston, which already has a pair of power play goals, was unable to take advantage of a 5-3 advantage to open up the third period.

End of second period — A late power play goal allows Boston to head to the locker room tied at 2-2 with the Chicago Blackhawks in the Winter Classic at Notre Dame Stadium.

Second period: 1:12 — Boston takes advantage of another power play to tie the game at 2-2 with the Blackhawks.

Patrice Bergeron gets his second power play goal of the game.

Second period: 8:36 — Chicago’s Dominik Kahun re-directs the puck past Tuukka Rask to make it 2-1 Blackhawks with 8:36 remaining in the second period.

Second period: 12:08 — There has been plenty of action and a couple quality scoring chances, especially for Boston, but the score remains tied at 1-1 as they hit the first media time out.

The statistics are as even as the score as the Boston Bruins hold a 14-12 advantage on the Chicago Blackhawks in shots on goal.

End of first period: Despite a breakaway in the closing seconds of the period by Chicago’s Patrick Kane, the Blackhawks and Bruins will head to the locker room tied at 1-1 in the Winter Classic.

First period: 7:15 — Boston takes advantage of its first power play opportunity as David Pasternak picks up his 24th goal of the season and we are tied at 1-1.

First period: 11:30 — Chicago’s Brendan Perlini beats Tuukka Rask to give the Blackhawks a 1-0 lead in the Winter Classic.

David Kampf and Dylan Sikura pick up the assists on the goal.

First period: 13:25 — The temperature was at 35.5 degrees when the puck was dropped at Notre Dame Stadium for the Winter Classic.

It may actually be warmer for the hockey game than the Garth Brooks concert back in October.

The ice appears to be good and it is most definitely fast as the teams are flying up and down the rink.

Boston has had most of the quality scoring chances through the first seven minutes of play.

The  Chicago Blackhawks and Boston Bruins, two of the National Hockey League’s “original six” teams, are no stranger to the Winter Classic.

The Blackhawks have played in six outdoor games and three Winter Classics. Chicago is still looking for its first victory in the

Boston has appeared in three outdoor games — all Winter Classics. The Bruins have hosted a pair of games, going 1-1 with a win over Philadelphia and a loss to Montreal.

For the first time since 1992, the NHL returns to the state of Indiana.

Chicago has played in all five previous regular season games in Indiana.

Notre Dame is the second college to host the Winter Classic and the fifth football stadium. Michigan hosted the 2014 Winter Classic.