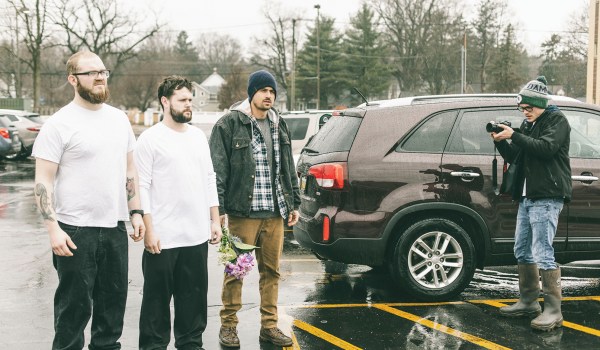 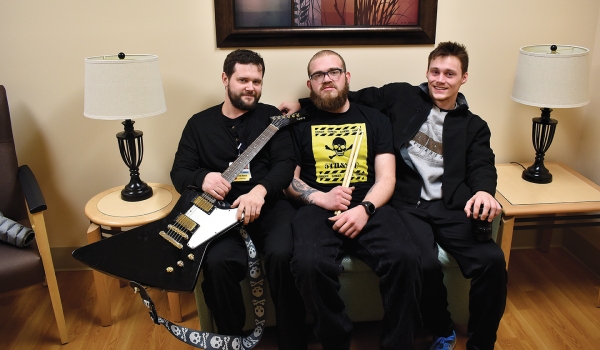 From left, 5th & Syc bandmates J.D. Miller and Brenden Nichols sit with filmmaker Courtlan Gordon prior to a shoot Friday morning. Gordon is helping the band to produce a music video for their first single: “Danger.”(Leader photo/KELSEY HAMMON)

NILES — In a muddy field on a Niles farm, Los Angeles filmmaker Courtlan Gordon sloshed through the muck Friday alongside bandmates from 5th & Syc, working to capture scenes for a music video for the band’s first single: “Danger.”

The music video will debut in the coming weeks and those who watch via YouTube or social media will see Niles locations as its backdrop. Niles volunteer actors also make up the fabric of the video.

5th & Syc is a hard rock and heavy metal band, comprised of rhythm guitarist and vocalist J.D. Miller, drummer and marketer Brenden Nichols, bassist Seth Kline and lead guitarist Mason Clark. Miller is a 2007 Brandywine High School graduate and Nichols is a 2011 Brandywine High School graduate. The band has gained a fan following and performed for crowds across Michiana at Cheers, The Music Factory in Battle Creek and Smith’s Downtown in Mishawaka.

For Gordon and the band members of 5th & Syc representing the community that helped them to make a name for themselves was a shared goal.

“It’s a huge part of this video,” Nichols said. “We are trying to make a footprint for the Midwest.”

Another unique part of the project is the partnership between Gordon and 5th & Syc.  While Gordon has lived in Los Angeles for the past seven months, he has ties to the Niles area and said he considers it home.

Gordon is a 2013 Brandywine High School graduate. Growing up, Gordon’s brother Lance Taliaferro and Miller were in a band together and he often listened to them jam. So, when it came to trusting someone to use their creative vision to make a music video, Miller knew that Gordon was an ideal fit for the job and Gordon felt the same way.

“I have known these guys my entire life and have been following their music, so we both were already on the same level before we even did anything together,” Gordon said.

Gordon brought on Ryan Becker, of Kalamazoo and formerly of Niles, as assistant director, producer and writer to assist with the project, too.

Gordon’s first interest in filmmaking began at the age of 7. Since then, he has grown a career, creating a YouTube channel called Oddest of Odds, with more than 33,000 subscribers. After moving to Los Angeles, he pursued a career in independent freelance filmmaking, which has given him the opportunity to help create music videos for well-known music artists, including Megadeth, Shaggy and SlipKnot.

Gordon said he was proud to add a local band to that list. 5th & Syc encouraged him to think outside the box when creating the video.

“We had to come up with a story based around the lyrics and what [Miller] was feeling when he wrote them. We all put our heads together and they gave me some creative freedom,” Gordon said.

Miller wrote “Danger” to reflect on the consequences that someone’s negative choices have not just on themselves, but also on the people they love.

“The chorus of the song says, ‘I’m a danger to myself,’ and it is based on how you live by the decisions you make,” Miller said. “Including when you make a decision that you know is bad for you, like smoking a cigarette.”

Gordon said he liked that the song contained an important message.

“Everyone thinks rock and roll is a scary genre, so it is cool that they wanted to sing about something important,” Gordon said. “This is a really deep story and I think anyone can look at it and relate.”

The video also seeks to bring awareness to domestic violence and destructive decisions like drinking and driving.

Throughout the filmmaking process, the band and Gordon said the Niles community has shown their support for the project. With his experience in filmmaking, Gordon approximated that a video like the one shot for 5th & Syc would cost around $50,000, but through the generosity of the Niles community, it cost only time.

“Doing this video almost brought like a small part of our community together,” Gordon said.

Millin Towing donated two vehicles for the band to use. Other businesses stepped up to let them use their property. Others volunteered to act in the music video.

“These are people we all grew up knowing,” Gordon said. “The older adults that are seeing what we are doing as artists, especially since not a lot of artists come out of Niles. They highly respect it and want to see us succeed.”

Those looking to check out “Danger” can listen to the song on YouTube or Spotify. To stay up to date on the music video release date, the bandmates advised following them on social media.