Looking back on the most impactful stories of the year 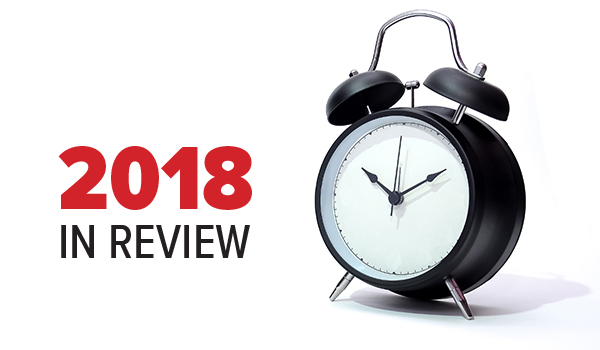 As the remaining days of 2018 whittle down to a new year, the Niles Daily Star reflects on the year’s top 10 stories. Each day will feature some of the biggest stories of the year that brought about significant change for the community and this year there were many. From coming together in times of tragedy to seeing new business developments and legislation change the economic landscape, it has been a busy year brimming with accomplishments and events that promise an equally exciting year ahead.

This year’s downtown took on an especially festive atmosphere thanks to the Niles DDA Main Street acquiring colorful and shiny decorations from Holland, Michigan.

This story made the Top 10 because residents responded enthusiastically to seeing the decorations in the downtown this year. The decorations also earned their own hashtag, #NilesMiniBean, a nod to the reflective surface of the ornaments resembling “The Bean” in Chicago. Residents snapped and shared photos of their faces in the new decorations.

It took a little tenacity, but Lisa Croteau, the Niles DDA Main Street director, was able to help the city obtain the decorations.

When she arrived in Holland to claim the decorations, she learned that the city was throwing in more ornaments than they had originally offered. While Croteau said she was delighted to hear this, it almost meant she had to find a bigger storage space.

Fortunately, French Paper Company allowed Croteau to temporarily store the ornaments in its warehouse space in the Industrial Park area.

The decorations include more than 80 swags — holiday boughs intertwined with ornaments and Christmas lights —which are intended to be hung from lampposts and about 50-holiday wreaths, comprised of stacks of ornaments and topped off with a giant silver ball.

Croteau thought the decorations would fit in particularly well in Niles, because they would look festive all winter, not just during the Christmas season.

To make sure the ornaments looked their best and brightest, Croteau called upon the Niles community to volunteer their time polishing, dusting and preparing the decorations. Many volunteers stepped forward helping to shuttle the ornaments from a truck to the Niles Entrepreneurial Incubator, where volunteers worked to clean them up.

Shortly before Thanksgiving, M.A.A.C. Property Services of Niles installed the decorations throughout downtown, adorning lamps with the swags and putting the wreaths in the planters.

It has been about 14 years since Niles Main Street last purchased holiday decorations for the downtown.

“We were in the right place at the right time,” Croteau said. “These were meant to be ours. It’s such a blessing. They are going to look beautiful.”

This school year, the Niles school district got a fresh start in the classroom and not just because it was a new semester. Across the district, bond construction, ongoing since 2016, wrapped up, providing students and staff with refreshed classrooms, upgraded heating, security systems and for the first time, air conditioning.

In spring 2015, community members approved a $40 million bond initiative to make repairs and upgrades to all of the district’s schools.

One of the significant hurdles in completing construction on time was finding labor to complete projects, because of the high saturation of projects on the construction market.

“It’s an ongoing issue,” Director of Operation Lewis Evans said during an interview in June. “If you ask about any small delays or quirks, that is probably the area it has happened in most is having labor available.”

This year marked a celebratory time when construction wrapped up. To commemorate the completion of the projects, the district hosted rededication ceremonies throughout the district. In 2017, celebrations took place for Howard-Ellis and Ring Lardner. This year, Eastside, Ballard Elementary, Niles High School and Cedar Lane were rededicated.

For Cedar Lane, adult education and W-A-Y students, the renovations were particularly meaningful, because they were moved closer to their community. Students moved into the form Oak Manor Sixth Grade Center, 1 Tyler St. The former Cedar Lane building, which was put up for sale, is located at 2301 Niles Buchanan Road. Their new school provided amenities like a gym, locker and kitchen area.

“We are so thankful to the community’s support through this bond initiative,” Applegate said. “There have been a lot of headaches but seeing the end result, you say, ‘wow that is really worth it.’ We have put in equipment that is going to last.”

After a three-day trial and listening to testimony and evidence from 19 witnesses, jurors deliberated that James Parker Huffman was guilty of first-degree murder on March 13.

Huffman’s conviction stemmed from a crime that occurred July 21, 2017, when Huffman was alleged to have strangled his longtime girlfriend, Angela Clara Gluver, at their home on 996 S. 14th St. in Niles.

Cluver’s body was found after Huffman went to the Niles police station July 24 where, according to testimony, he told police that he had committed a crime and led officers to her body. Cluver’s cause of death was ruled to be manual strangulation.

When Huffman confessed the crime to police, he told investigators that Cluver’s death was part of a suicide pact, according to court testimony.

It took an hour and a half for jurors to reach their conclusion and they ruled that Huffman was guilty of murder in the first degree. On April 30, Judge Charles LaSata gave Huffman a mandatory life in prison sentence without the possibility of parole.

Throughout the trial, the court heard testimony from Huffman and Cluver’s friends, family, neighbors and coworkers, as well as a number of experts and police authorities.

Cluver’s murder was the second to take place in the Niles area in 2017, but it was the only trial to come to a conclusion this year.

The case of John Benton Lewis, who is alleged to have fatally shot his wife Carla Jean Lewis at their Niles Township home Aug. 13, experienced some delays to his trial.

Lewis was charged with first-degree premeditated murder in 2017.

Lewis’ jury trial has been rescheduled many times. Initially, he was scheduled to go to trial in May 2017. Court council cited the need to have more time to process discovery, leading to several adjournments.