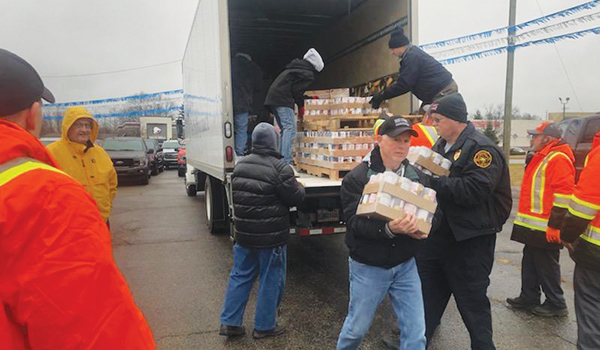 DOWAGIAC — Friday morning, the parking lot of C. Wimberley Automotive in Dowagiac was seemingly hectic, as more than 100 volunteers unloaded boxes from a large truck, moving quickly to load up the boxes into awaiting vehicles.

Though Christmas was just days away, the boxes were not typical presents of trinkets or stocking stuffers. The boxes were filled with food that was being distributed to area food banks as part of Dowagiac’s annual Feed the Hungry campaign.

“It’s a huge party,” said Jim Allen, organizer of the Feed the Hungry program. “We jam up that Ford parking lot for an hour. … It’s quite a sight.”

Each year, the program works to raise $20,000 worth of donations to provide food items to area food pantries. Every dollar collected is turned over to Dowagiac’s ACTION Ministries, which uses the money to purchase food items from Feeding America West Michigan’s Benton Harbor warehouse for pennies on the dollar.

For every $1 Feed the Hungry raises, ACTION can buy $6 worth of food, according to organizers. Money raised will also go toward funding mobile food trucks that will visit various locations in the county throughout the coming year.

As of Friday, the program had reached its goal for the year, though the program is still taking donations.

Allen said he was happy that Feed the Hungry was once again able to meet its goal, putting it down to the generosity of the people of Cass County.

“It feels wonderful,” Allen said of reaching the goal. “The people of Dowagiac and Cass really help a lot. Dowagiac really rallies for this program. This is a real giving community.”

Jeff Neumann, president of ACTION Ministries, agreed that the generosity of Cass County residents made Friday’s distribution possible and said the 2018 campaign was successful.

“Everyone came through,” he said. “It’s a habit now. People are thinking about the program this time of year, and when the campaign comes through, they are responding. I think it went very well.”

In 2019, the program will be hitting a milestone as it will be its 10th year of serving the community. Though Allen and other volunteers will not start fundraising for the 2019 program until November, Allen already believes it will be a success, as the program is set in a routine that has proven to work, he said.

While both looking toward the future of the 2019 program and back on the 2018 program, Allen said he is grateful to the community for giving back and said that he has one piece of advice that never changes from year to year.

“Always donate a dollar,” Allen said. “If everyone donates a dollar, this program just flies.”