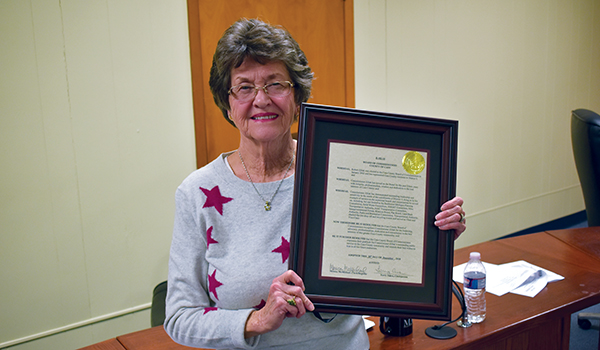 Commissioner Roseann Marchetti holds the document from the board of commissioners honoring Robert Ziliak. Ziliak was not present to accept the document. (Leader photo/ADAM DROSCHA)

UPDATE: A correction was made to this article Monday, December 31, 2018. The original article stated the primary race between Robert Benjamin and Robert Ziliak was initially a tie. The article now recounts the actual results. Read below.

CASSOPOLIS — On Thursday, the Cass County Board of Commissioners handled the last business of 2018, attempted to set their meetings for 2019 and honored one of their fellow board members for his 15 years of service.

Robert Ziliak was elected to the Cass commissioner board in 2003, but his service went, and will be remembered, far beyond the commissioner chamber.

“Whereas Robert Ziliak has served on the board for the past 15 years with integrity, professionalism, wisdom and dedication to the best interests of Cass County…,” Roseann Marchetti read from R-182-18, the document unanimously passed by the board to remember Ziliak’s service.

“Be it (further) resolved that the Cass County board of Commissioners expresses their gratitude for Commissioner Ziliak’s outstanding public service to the Cass County community and extendes their best wishes to him in all his future endeavors,” Marchetti read.

Although Ziliak was not in attendance to accept the honor, the document was framed for his acceptance and use at a later date.

Ziliak represented the fifth district in Cass County, which was made up of the entirety of Milton Township and approximately half of Howard Township. During the August primary election, Ziliak ran for his seat against former Milton Township Supervisor Robert Benjamin. Benjamin initially won the primary by one vote, until another vote was found in his favor a few days after the election. After a recount, four more votes placed Benjamin ahead of Ziliak by six votes.

Prior to the official board meeting, the commissioners held their Committee of the Whole meeting, at which time they further discussed the 2019 calendar year of commissioner meetings and COW meetings. The board discovered several discrepancies and conflicts for department heads and incoming board members. Commissioner elect Robert Benjamin had a conflict with the regular Tuesday morning COW meetings, but Cass County prosecutor Victor Fitz, and Sheriff Richard Behnke also discouraged the council from morning meetings during weekdays. The commissioner board did not officially settle for new COW times, but the general consensus was to move them to the evening, and keep to keep them brief.

In other business, the board chose its next member for the road commission, and voted in favor of Les McClelland, over four other candidates. The board also approved a letter to the Sustainable Built Environment Initiative on behalf of Edwardsburg, which is in the process of applying for SBEI’s program to create visions and models for economic development in the village, similar to the Imagine Cass Project. The approval of the letter is due, in part, to cooperation with the Village of Edwardsburg, and Ontwa Township.