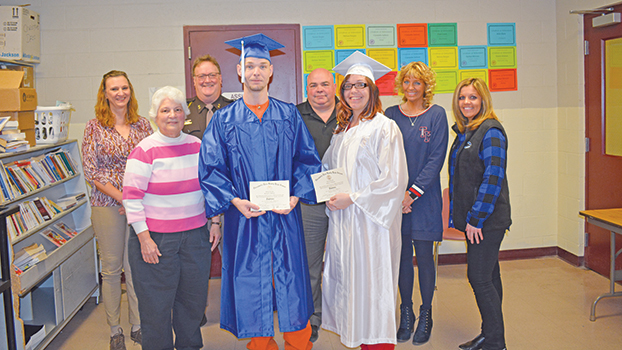 CASSOPOLIS — Though it took them longer than they intended, Herbert McGraw, 33, of Niles, and Melissa Borgais, 36, of Dowagiac, stood inside the Cass County Jail Thursday, dressed in the Cassopolis colors of blue and white, as they moved tassels from the right side of their faces to the left, signifying that they reached a milestone in their lives.

Inmates McGraw and Borgais graduated from the Cass County Jail adult education program Thursday morning. Kenneth Burrington Jr. also graduated in absentia Thursday, as he had previously been released from the jail. The program allows inmates to take classes, meet with a teacher three times a week to complete high school credits and graduate with a diploma.

The fact that the program issues diplomas rather than GEDs separates the Cass County program from other jailhouse continuing education programs, according to program officials.

“This is a program where the sheriff’s administration and the school administration work together to promote education in Cass County,” said program teacher Helene Hoover. “This gives [inmates] something to do and something to focus on. They come out with more than what they came in with.”

Spirits ran high among the graduates that morning, with both McGraw and Borgais saying that they planned to use their new diplomas to help themselves better their lives.

McGraw came into the program in September with only one credit. He said he wanted to participate in the program and worked so hard to graduate for his daughter and that he plans to enter in a machining program after he is released.

“It means a lot to me [that I was able to graduate]. This is the first step to turning my life around,” he said. “I want to show [my daughter] to work hard, and she can’t have an excuse if she doesn’t want to go to school. If I did it, she can do it, too.”

For Borgais, earning her degree was nearly 20 years in the making. She said she was proud that after all these years she is finally able to have a diploma, and she plans to continue schooling at Southwestern Michigan College to become a social worker upon her release.

“I’m glad I was able to take advantage of being here and not have this place be a waste of time,” she said. “This is an achievement for me. I’m happy to wear the cap and gown and have my diploma.”

Before McGraw and Borgais could leave with their degrees in hand Thursday, Cass County Sheriff Richard Behnke congratulated the graduates on their achievement and encouraged them to continue to make positive decisions in their lives.

“Take advantage of this opportunity,” he said. “Keep up the good work and continue on. Go on to college. Keep getting credits. Get some specialized degree. … Don’t rest. You can never have too much. Good luck and congratulations.”

“This is just the first step,” added Angela Piazza, superintendent of Cassopolis Public Schools. “You can take this and go so much further.”