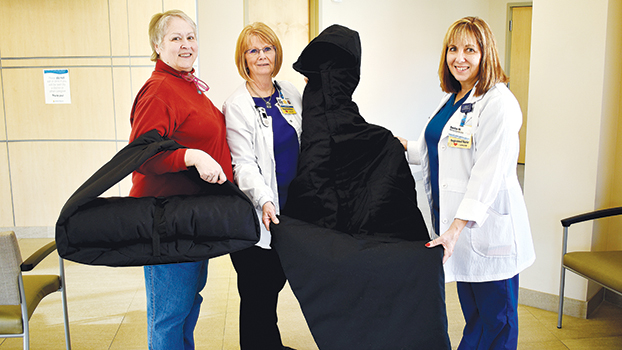 NILES — When the temperatures turn frigid in southwest Michigan, emergency room staff at Niles Lakeland Hospital see homeless people with nowhere to turn show up at the facility’s door.

Thanks to the efforts of the Dream Center, those in need can leave the hospital with a warm coat to wear that is also designed to be folded out into a sleeping bag.

The coats were collected through the Dream Center’s Share the Warmth Coat Challenge, which is ongoing through Jan. 2. So far, the charity organization’s efforts have raised $880. This allowed for the purchase of six coats from the Empowerment Plan, a Detroit-based nonprofit, which agreed to match up to five coats, for a total of 11 coats.

Burge said she believes the coats will be an asset to the local emergency room.

Throughout the winter season, Burge said the hospital sees between four and five homeless people visiting the hospital. If circumstances allow, Burge said they permit those in need to sit in the waiting room until about 7 a.m. when patients come in. Now, she said they will be able to offer them a little more comfort.

“Some come in and make up symptoms just to get out of the cold,” Burge said. “We can give them one of these [coats] to protect them.”

While the fundraiser is ongoing, Adler said she did not want to wait any longer to give the coats away. She said the Dream Center will distribute them to those who frequently work with the homeless, including the Niles Police Department and HERBIE Health Clinic. The rest Adler will store and re-supply the hospital and health clinic when needed.

On Wednesday as she donated the two coats, Adler said it felt great to see fundraising efforts materialize.

“It is wonderful to network with caring people in the community, who don’t always have the resources to help like they would like to,” Adler said. “We don’t want these coats sitting in a storeroom somewhere, where no one can access them.”

Adler is an adult services team member at the Niles District Library. Through her job, she said she often encounters those who are homeless. Adler said she admits that she initially believed some stereotypes about the homeless until she got to know them better.

“There are people in Niles who have opinions against the homeless. They think they are lazy, they are all drug addicts. [These] opinions pigeonhole all of them,” Adler said. “Since I have dealt with the homeless at the library, I have learned that they have personalities and a sense of humor and that it hurts them when … people assume that they are lazy, that they are addicted or stupid. These are people that are sleeping in 20-degree weather, and we can do something about that.”

With this in mind, she asked people to consider giving to the Share the Warmth Coat Challenge.

Adler said the challenge benefits people outside of the Niles community. Those who donate to the project are also helping homeless people in Detroit have a paying job through the Empowerment Plan.

Veronika Scott founded the organization after she was inspired by a college-level project. Scott had been looking for a way to address homelessness, and while conducting research, a homeless person told Scott she did not need a coat, she needed a job. According to the organization’s website, the comment spurred Scott to take action, and she started the Empowerment Plan. Through the Empowerment Plan, the homeless are hired to learn sewing skills and create specialized coats. The coats can be worn as regular winter wear and then can fold out into a sleeping bag position.

Adler said she hopes the Dream Center can raise $1,500 to purchase 17 coats total, including those matched by the Empowerment Plan.

Since initiating the fundraiser, Adler said she has been touched by the Niles community’s generosity. She said they have seen support from local business and residents. Adler said she was particularly moved by a grandma who gave money to her grandchildren to donate to the cause.

“That was one of the high points for me, seeing it passed on to another generation [to inspire] giving,” Adler said.

Those interested in donating can visit crowdrise.com/o/en/campaign/empowermentplanholiday18/caryn-adler or call Adler at the library and ask to set up a time to give money in person.