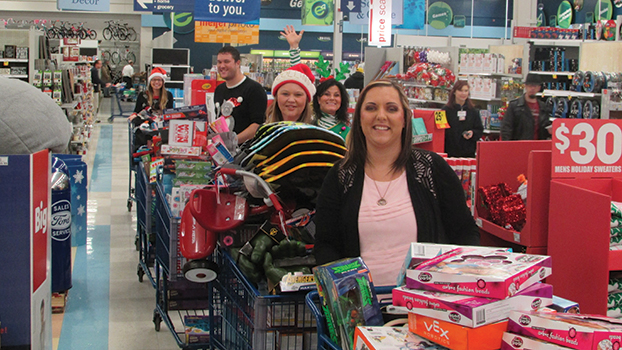 SOUTH BEND — The Pokagon Band of Potawatomi Indians and Four Winds Casinos are pleased to announce that  936 toys were presented to Toys for Tots on Monday for distribution to families in need this holiday season.  The new toys were collected throughout December from employees, as well as through a special poker tournament hosted at Four Winds Casino South Bend on Sunday, Dec. 16.

“There are a few aspects to what we did for Toys for Tots,” said Frank Freedman, chief operating officer of Four Winds Casinos. “First, the employees donated gifts of all types — board games, dolls, bikes, and everything in between. They also donated money through payroll deduction, which our human resources department used to purchase even more toys.”

Additionally, a No Limit Hold’em poker tournament took place at Four Winds South Bend over the weekend. Part of the buy-in for the tournament was a new, unwrapped toy. A total of 53 toys were collected as part of the Sunday tourney and added to the total.

“We’re so proud of our employees, who embraced this toy drive wholeheartedly,” Freedman said. “There is a lot of joy that comes from this shopping experience, knowing the happiness these toys will bring to so many kids.”

Freedman said the employees of Four Winds voluntarily participate in multiple fund drives throughout the year, including the most recent donation of $10,000 to Kelly Cares Foundation raised in October to support the mission of that organization. They have also raised funds for other nonprofit organizations including LOGAN Center, American Heart Association, Susan G. Komen and American Red Cross, following Hurricane Maria.

The Pokagon Band of Potawatomi Indians’ sovereignty was reaffirmed under legislation signed into law by President Clinton in September of 1994. The Pokagon Band is dedicated to providing community development initiatives such as housing, education, family services, medical care and cultural preservation for its approximately 5,000 citizens. The Pokagon Band’s 10-county service area includes four counties in southwestern Michigan and six in northern Indiana. Its main administrative offices are located in Dowagiac, with a satellite office in South Bend.  In 2007, it opened Four Winds Casino Resort in New Buffalo, followed by Four Winds Hartford in 2011 and Four Winds Dowagiac in 2013. Four Winds South Bend opened Jan. 16.  It owns and operates a variety of business via Mno-Bmadsen, the tribe’s non-gaming investment enterprise. More information is available at pokagonband-nsn.gov, fourwindscasino.com and mno-bmadsen.com.