Founding member retires from Beckwith board 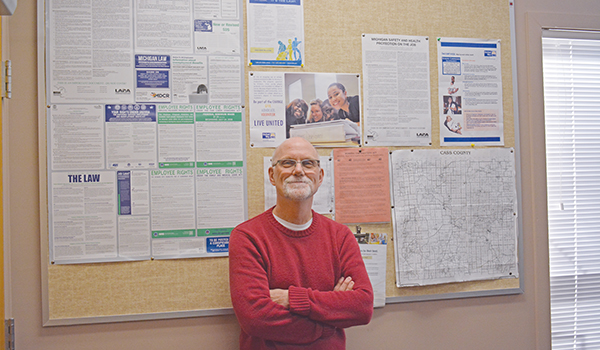 DOWAGIAC — Even though nearly 30 years have gone by, Rich Frantz, 64, formerly of Dowagiac, can still remember the early days of the Beckwith Theatre. In the days before the Beckwith had its building on New York Avenue, Frantz would have to lug boxes from space to space, practicing wherever he and his fellow performers could.

“It was worth it,” Frantz said, leaning back into his chair, getting lost in the memory. “I just love theater. It brings people together like nothing else.”

Now those days are long past, and the Beckwith is a thriving local theater with an active play schedule, wine receptions and sold-out shows. Looking on all that the Beckwith has accomplished over the last three decades, Frantz feels like now is the time for him to take a step back.

Community playhouse, the Beckwith Theatre, is losing another long-time member from its board, as Frantz recently announced that he is leaving his position as a board member at the end of the month. Frantz’s retirement comes not long after the resignation of Paul Pugh, another founding member, who left the board in earlier this year.

Frantz was one of a group of people who took steps to bring back community theater in Dowagiac in January 1990. In those years, Frantz was instrumental in many of the developments that took place to the Beckwith and directed more than 40 productions. With so many productions and board meetings, Frantz said he could not choose a favorite memory from his time on the board, but that he will always remember the feeling of seeing a show go up on stage.

“Even if you aren’t the director, seeing a show goes well makes your whole day,” Frantz said. “It’s just wonderful.”

With his retirement, Frantz is leaving behind a legacy and a board full of people who are sad to see him go, said board members.

“He is a great person and great director,” said board president Jack Gannon. “The professionalism he brings to the plays is a very big part of the ongoing quality [at the Beckwith].”

Max Sala, who has acted in many plays under Frantz’s direction over the years, agreed.

“He is one of the finest directors in southwest Michigan,” Sala said. “He’s a special guy. He has a special gift for directing people.”

Though he said he was touched by the respect of those involved with the Beckwith, Frantz said he knew now was the time for him to retire from the board, as he feels that the current board has the energy and vision to continue to make the Beckwith successful.

“I’ve been waiting for the right board to come along where I feel I can walk away and not leave them in the lurch,” Frantz said. “Right now, we have a great group of young people on our board who are going to do great things with the Beckwith. … They are allowing me to feel comfortable leaving.”

One of those newer, younger board members is Andi Creasbaum, of South Bend. She said that she is touched and honored that she is part of a board that Frantz trusts enough to leave Beckwith to.

“I’m very sad to see him leave,” she said. “[Going forward], we want to continue the things Rich started. We are really excited about the things we have coming up and the season coming up. … I want to make [Rich] proud.”

Though he is retiring from the board, Frantz is not leaving the Beckwith for good. He still plans to direct shows and be an active supporter of the theater, saying he will always support community theater.

“There is nothing like it. There is an immediacy to theater that you can’t get anywhere else,” Frantz said. “It draws people to our community. I know it does. It helps local business. It helps our reputation. Sometimes, people say that small towns are a cultural wasteland. But here, in Dowagiac, we have a rebuttal. We have the Beckwith.”