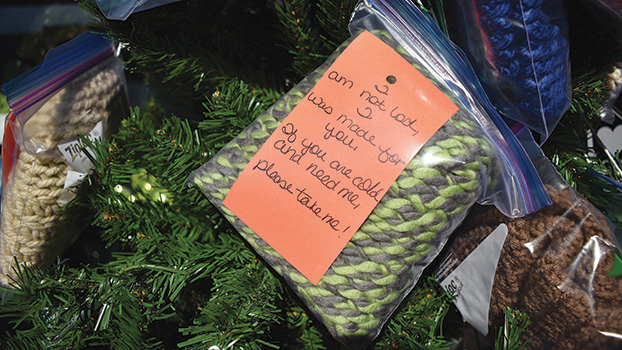 NILES — Missy Duttenhaver, of Edwardsburg, likes to unwind with her craft projects.

Sometimes that means making candles or crocheting, which is how she ended up with an abundance of hats around her home.

Duttenhaver usually sells her products through her business the Crafty Ginger Lady. This holiday season, however, she decided that she wanted to donate some of her handmade items to help others keep warm.

Duttenhaver knows Pizza Transit owner, Sarah Brittin, and she asked if she could put up a Christmas tree outside the store. Hanging from the branches are the Duttenhaver’s handmade hats. A tag encourages people in need to take the items.

“It says, “If you’re cold and you need me, take me,’” Duttenhaver said.

Subsequently, she said she has encouraged members of the community to donate winter wear to hang on the branches.

“I was taught that if you can give, you just give,” Duttenhaver said. “I don’t know if my family is sick of getting hats, but … I just had a whole bunch of them, and I don’t think there was as much of a need for them in Edwardsburg.”

Duttenhaver has had the tree up for about two weeks. While this is the first time she put up the tree outside Pizza Transit, it is not the first time she has used her crafting skills to help others. Last year, she crocheted items to donate to a bike shop in Elkhart. This year, though, Duttenhaver said she wanted to make her effort more local.

“I kind of wanted to do it closer to my hometown,” Duttenhaver said. “That’s when I thought of Sarah at Pizza Transit.”

Duttenhaver said Brittin had told her that she notices many people walking the downtown that appear to be homeless or in need.

“We kind of want it out in the open, so people don’t have to go into a store,” Duttenhaver said. “It is there, and they can take it as they need it.”

Duttenhaver has operated Crafty Ginger Lady for a number of years. Before taking a job with the Edwardsburg Public Schools district, Duttenhaver was a stay at home mom. To make some extra money, Duttenhaver began making candles and crocheting items to sell at craft shows across the Michiana area. Customers started reaching out, asking her to make different things and from there, her business continued to grow.

In addition to selling her wares at local shops, she now sells items around the U.S. and the U.K.

As people visit the downtown to do some holiday shopping, Duttenhaver said she hopes that the Christmas tree provides warmth to those who need it and inspires the spirit of giving.

“My goal is just to help someone, and then people will see that,” Duttenhaver said. “If they can see that and need it, maybe they can [help] with a pay it forward.”

To learn more about the Crafty Ginger Lady, visit the business’ Facebook page. Customers can find Duttenhaver’s merchandise at Treasureology and Restyled Furnishings, both located in Granger.