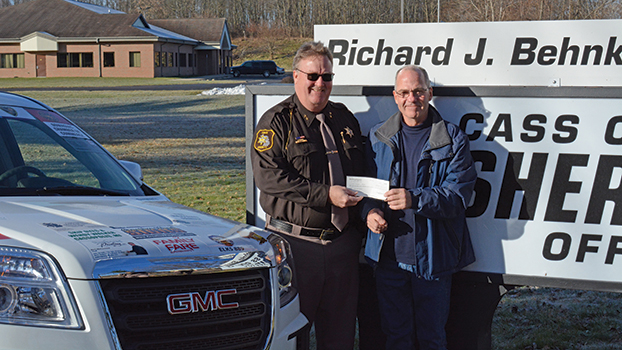 CASSOPOLIS — Though most would not be able to tell looking at their now clean-shaven faces, deputies with the Cass County Sheriff’s Office spent last month letting their facial hair grow wild and free to benefit a local charity.

Last month, the Cass County Sheriff’s Office took part in No Shave November for the second year in a row. This year, 29 employees from every department of the sheriff’s office participated in the event, each paying $50 for the opportunity to skip their morning shave and let their facial hair reign free. Now, after collecting $1,460, the participants decided to donate the money raised to Dowagiac’s Feed the Hungry program, organized by C. Wimberley Automotive and ACTION Ministries. Tuesday, Cass County Sheriff Richard Behnke presented the check to Jim Allen, a representative and organizer for Feed the Hungry.

No Shave November, founded in 2009, was initially started to raise cancer awareness and research funding by having participants put down their razors for the month of the November and donate the money they saved on grooming costs, according to the Matthew Hill Foundation, the organization that hosts No Shave November. However, in recent years, many organizations across the country have adopted the program to raise funds for other causes.

The Cass County Sheriff’s office has followed that trend.

Not only has the sheriff’s office donated to this year’s feed the hungry campaign, but last year, the Cass County Sheriff’s Office gave to Domestic and Sexual Abuse Services, an organization that works to end domestic and sexual violence in Cass, St. Joseph and Van Buren counties. The organizations that the sheriff’s office has donated to are chosen and voted on by those who participated in the No Shave November challenge. For this year’s donation, Behnke said the choice came down to a tie between Feed the Hungry and another organization, with Feed the Hungry winning the gift through the draw of a hat.

“We kind of put our own twist on it because we wanted to support local charities,” Behnke said.

Following the success of last year’s No Shave November event, Behnke said he knew he wanted to the host event again, not only because it offered his deputies a change of pace — typically the only facial hair allowed is a mustache that does not extend past the corners of the mouth — but also because of the positive response the program received from the community and the opportunity to give back.

“Community is important, and it is good to give back,” Behnke said. “I’ve been to the food pantries, and you can see that there is a need there. … [The sheriff’s office] is happy to help.”

Allen, with Feed the Hungry, said he was grateful for the donation, saying it could not have come at a better time, as the organization is working to raise $20,000 by Friday to provide food for area food pantries throughout the year.

“This is just a tremendous boost,” Allen said. “We are so appreciative that [the sheriff’s office] is involved. They help us in so many ways. This is a big, big deal.”