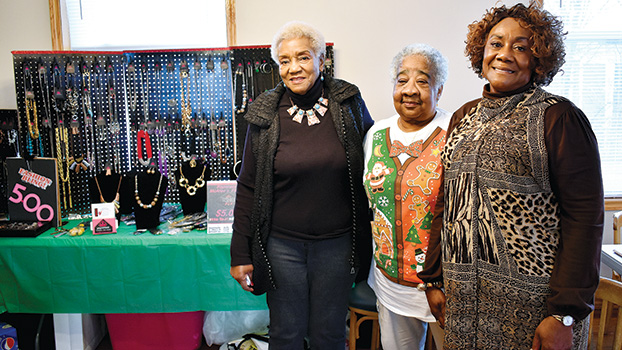 NILES — Holiday shoppers hunting for something signature to put under the Christmas tree had a pretty good chance of finding it Friday at the Bell Building.

Dozens of vendors selling everything from antiques, purses and scarves to Christmas décor and made from scratch baked goods filled the building to take part in the Unique Holiday Bazaar.

The event was hosted by Mount Olive Church. The bazaar included not only shopping but giveaways and food. The Niles Fire Department also attended to share safety information.

Charlie McAfee, a Niles city council member, helped to organize the event alongside her daughter May McAfee and Jeanette Pearson. She said they wanted to host the bazaar to help people find holiday bargains, while also promoting “Mom and Pop shops.”

“It’s just before Christmas and everybody is looking for something,” McAfee said.

McAfee said she was happy to see such a variety of vendors take part to offer something special for the holidays.

Christine Sherene, of Benton Harbor, is a small business owner who attended Friday’s event. While she works a full-time job as a parent coordinator at the Readiness Center Preschool in Benton Harbor, she described her business, Moma Chrissy’s Creations, as her “side hustle.”

During the bazaar Friday, Sherene was stationed at a sewing machine, whipping up a handmade, “Paw Patrol” blanket. Sherene said she takes pride in making something that would not be available in a big box store.

“I like making one-of-a-kind things you won’t see anywhere else,” Sherene said. “The original and uniqueness of a custom piece from a small business is something that can be cherished because no one else has it but you.”

Sherene said she knows Charlie McAfee and was happy for the opportunity to take her business somewhere new.

“This is my first time actually venturing out from Benton Harbor to do a bazaar,” Sherene said.

Shirley Clark, of South Bend, also saw the event as an opportunity.

While Clark does not own a business, she is known for her baking aptitude and her famous sweet potato pie. Clark said she felt the holiday shopping event was a chance to spread a little sweetness in the form of her pies, German Chocolate cakes and brownies. She also sold a couple of other wares she had collected, including Santa Claus figurines and scarves.

This fall, Clark was a WUSB radio station contest winner for her sweet potato pie. She enticed people with free samples during the bazaar Friday.

“I’ve made the sweet potato pie in memory of my mom,” Clark said.

In addition to finding something to cross off their Christmas list, Clark said she hopes the bazaar inspired some Christmas spirit in shoppers.