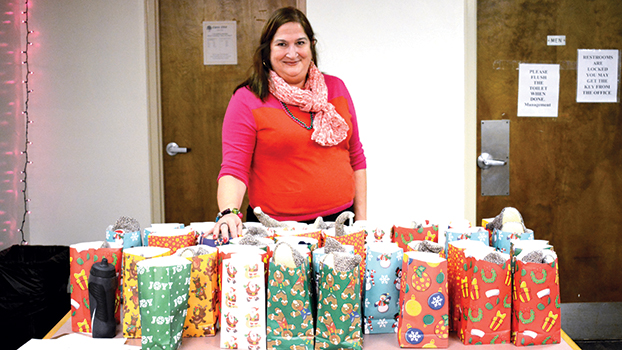 DOWAGIAC — As a group of young children listened to “‘Twas the Night Before Christmas” inside Chestnut Towers Wednesday evening, a man clad in a red suit and carrying a gold bag of gifts burst onto the scene with a proclamation, much to the delight of the children in the room.

All the buzz was part of a Christmas party hosted by the Dowagiac Housing Commission Wednesday night.

The Dowagiac Housing Commission provides affordable housing to moderate and low-income families and individuals. The Chestnut Towers property, where the party was hosted, serves individuals 55 and older, or people with disabilities. Residents and families from the Parkside property were invited to the party as well.

“We wanted to host a Christmas party for all of our tenants and their children,” said Executive Director Laura Wagley. “We wanted to get all our tenants together, so the older people could spend time with the little kids as well.”

“This is about spreading holiday cheer and letting our residents know how much we appreciate them and care about them,” Wagley said.

The Christmas party is just one part of a larger push by the Dowagiac Housing Commission to increase the quality of living for residents at the commission’s properties, according to Wagley. In addition to the party, the commission has been working on larger capital improvements and smaller projects, such as adding new paint, landscaping and carpeting to the buildings.

Wagley said she hopes that the work that the commission is putting into the properties will make residents proud to live there.

Dowagiac Housing Commission tenants, from the youngest to the oldest, said they were grateful for the Christmas party.

Sitting with her young daughter on her lap, Parkside resident Shannon Sell said she loved that the commission hosted a fun event for her children to experience the holiday spirit, her daughter nodding along as she spoke. Sell added that she felt the pride Wagley was talking about when she was at the party.

“This is a really nice thing that they are doing,” she said.

Chestnut Towers resident Sarah Davis, 89, said she also appreciated both the event and all the housing commission has been doing for the building in which she lives. Her favorite part of the party was being able to talk with friends and watch the young children have fun, she said.

“I feel very comfortable [at Chestnut Towers],” she said. “And I think this event is beautiful.”

Watching the residents mingle with each other and the children take pictures with Santa Claus, Wagley said she was glad that residents seemed to be enjoying the party, adding that she hopes the commission will be able to host it again next year, as well.

“We want this to be a nice place to live, just like it would be in the private sector,” she said.