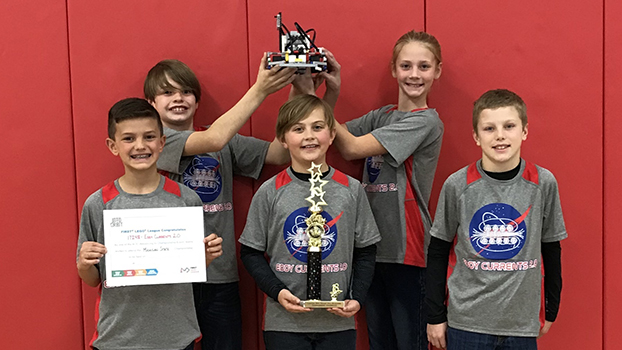 The team was awarded the “Champion’s Award.” third place. This award recognizes the team that embodies the FIRST LEGO League experience by fully embracing the core values of the program while achieving excellence and innovation in both the Robot Game and Project.

The Eddy Currents were one of 60 teams to compete at this event. Prior to the state tournament, they competed at the Lancer-Bot Mania regional qualifying tournament in Stevensville, on Saturday, Nov. 17, where they were awarded Tournament Champions for the second year in a row.  The team has advanced to the state championship three out of the last four years.

This year’s team consisted of fourth and fifth grade students from Edwardsburg: Aidan Dohm, George Scupham, Mya Eberlein, Owen Andress and Michael Wright.  They are coached by Andrew Dohm, who is a physics and math instructor at Southwestern Michigan College, and Nichole Dohm who teaches science at Edwardsburg Middle School.

FIRST LEGO League teams (up to 10 members, from fourth, fifth, and sixth grades) research a real-world problem and are challenged to develop a solution.  They also must design, build, and program a robot using LEGO MINDSTORMS, then compete on a table-top playing field.  This year’s theme was “Into Orbit” where teams were challenged to explore and innovate in the vast expanse of space.

The team learns to apply science, technology, engineering and math concepts, plus a big dose of imagination, to solve a problem.  Along their journey, they develop critical thinking and team-building skills, basic STEM applications and presentation skills, as they must present their solutions with a dash of creativity to judges. They also practice the Program’s Core Values, which emphasize discovery, innovation, impact, inclusion, teamwork and fun.  For more information about the program or to learn how to start a team, visit firstinspires.org/robotics/fll.