SMC hosts Diversity Week to celebrate traditions across the globe 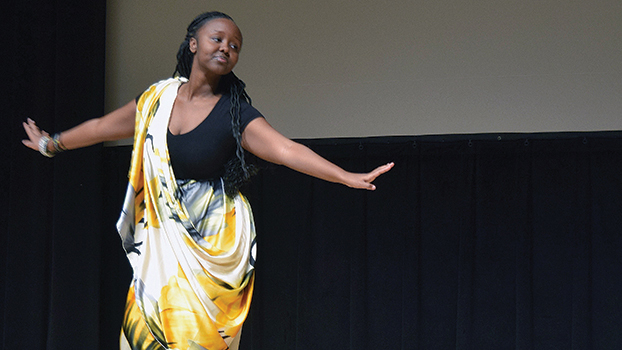 DOWAGIAC — Southwestern Michigan College’s second annual Diversity Week celebrated Hanukkah, Diwali, Kwanzaa and Mawlid un-Nabi Dec. 3 to 6 in the Dowagiac campus’ Student Activity Center. The emphasis of the week was to highlight other cultural observances that occur in November and December.

The week began with celebrating Hanukkah, the “Festival of Lights,” observed for eight nights and days Dec. 2 to 10 this year. SMC’s dual-enrolled Dowagiac student Jossalyn Rogalski, 16, presented an overview of the Jewish holiday commemorating rededication of the Second Temple in Jerusalem at the time of the Maccabean Revolt against the Seleucid (Syrian-Greek) Empire.

As part of the observation, candles are lit on a menorah, a nine-branched candelabrum. One branch is typically placed above or below the others. Its candle, the shamash, lights the other eight. Activities include playing dreidel, a four-sided spinning top, and eating oil-based foods, such as latkes, potato pancakes, and sufgniyot, round jelly doughnuts.

Monday’s program continued with poetry read by Kristina Wildes, of Marcellus, and songs sung by MerCelia Peterson from Stevensville Lakeshore High School and Elliana DiMarzio, of Niles, a dual-enrolled Edwardsburg High School student. Peterson accompanied herself on guitar for Peter, Paul and Mary’s “Light One Candle.”

Tuesday featured Diwali, the Hindu festival of lights, which signifies the renewal of life and the end of India’s harvest season. Diwali is characterized by five days of various rituals to celebrate light over darkness.

“I fuse different forms of belly dancing,” Zovich said. “You can do movements in isolation and layer them on top of each other. I started with Ruby Jazayre’s troupe, Sisters of the Nile. She does a lot of Egyptian Oriental. I recently moved to Fort Wayne, where Deniz Miller teaches Turkish Oriental.”

Zovich started dancing four years ago at Indiana University South Bend, where she studied communications, concentrating in public relations with a double minor in graphic design and dance.

“I know her from (saber balancing at the college’s inaugural 2017 Renaissance Faire),” said sociology instructor Dr. Barbara Karwacinski, the week’s primary organizer on behalf of SMC’s Cultural Diversity Committee. “I fell in love with her talent. That’s why I invited her.”

Kwanzaa, celebrating African-American families, anchored Wednesday. Its name comes from a Swahili phrase meaning “first fruits.” Maulana Karenga, the California professor who created the non-religious holiday in 1966, chose Swahili as a language undefined by a particular region or tribe.

“My family’s from Rwanda,” she said. “I’ve been there four times, including this past summer. My parents both went to SMC. My parents love this school and trust it with my education”

In addition, Abednego Saah, from Liberia, talked about his African homeland.

“More than 40 students volunteered to help with the Kwanzaa celebration. It truly took a team,” Karwacinski said. “Since Christmas is the most widely celebrated holiday in our community, events were meant to acknowledge other major holidays in November and December.”

The four days of festivities culminated with a presentation by Imam Mohammad Sirajuddin of the Islamic Society of Michiana. Originally from India, Sirajuddin has been at the South Bend mosque for 20 years.

Islam is the second-largest religion with 1.8 billion followers, or 24 percent of the world’s population. A 2017 study estimated 3.45 million Muslims lived in the U.S. — 1.1 percent of the population. Muslims are one of the most racially diverse U.S. religious groups.

“We have around 700 individuals from 50 nationalities,” said the Imam, noting boxer Muhammad Ali attended his mosque while living in Berrien Springs.

Mawlid un-Nabi is an official holiday in 47 Muslim countries which celebrate the birth of Islamic Prophet Mohammad in A.D. 570 in Mecca (now Saudi Arabia) with feasts, festivals, parades and decorations.

The Cultural Diversity Committee chaired by Vice President of Instruction Dr. David Fleming develops and recommends strategies for education, training and other activities supporting the college value of creating an environment that fosters an appreciation and understanding of culture and global diversity.