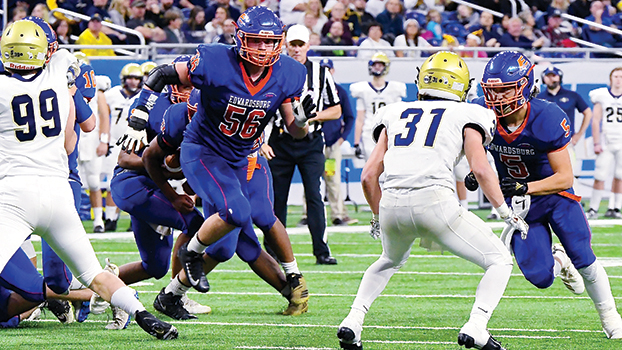 Josh Priebe looks for someone to block in the Division 4 state championship game against Chelsea. (Leader photo/KELLY SWEENEY)

Priebe, along with the other dream team members, will be honored at a banquet Dec. 20 at the Dearborn Inn.

The high school coaches association for the first time partnered with the National Football Foundation and the College Football Hall of Fame to select the 2018 High School Football Dream Team.

“For Josh to be named to the 2018 football dream team confirms that he is one of the best offensive linemen in the state of Michigan,” said Edwardsburg coach Kevin Bartz. “Josh has worked extremely hard improving his strength, quickness and technique since the end of the 2017 season. He attended several Division 1 one day camps where he impressed coaches with his overall abilities and his tenacity in one-on-one drills against defensive linemen. Josh is the complete package, he is 6-foot-5, 265-punds, agile, strong, aggresive, intelligent and coachable.”

The process of nominating potential dream team members began back in November when head coaches nominated their best players for all-state consideration.

Coaches association committees representing each of the eight divisions on 11-man and two divisions of 8-man football selected all-state teams in each division.

The MHSFCA then selected the dream team from those all-state squads.

“To be named to the dream team as a junior is a great honor for Josh. For Edwardsburg football, it means that we have a highly recruited Big Ten caliber football player that will be playing for us one more year and that is pretty awesome. Josh has a great work ethic and I would expect that he will be even bigger and better next year.”

Scholar-athletes were chosen from academic all-state nominees, which were also submitted by coaches who were members of the association. The top two nominees were selected to receive the Scholar-Athlete Awards.

The association will also honor its Dream Team Coach of the Year, John Herrington, of Farmington Hills, who also serves as the president of the MHSFCA. Herrington is retiring as a high school football coach with the most wins in state history.

At the banquet, University of Michigan coach Jim Harbaugh will serve as the keynote speaker, as will Michigan State senior safety Khari Willis.

Payments may be made by mail or credit card prior to the event.