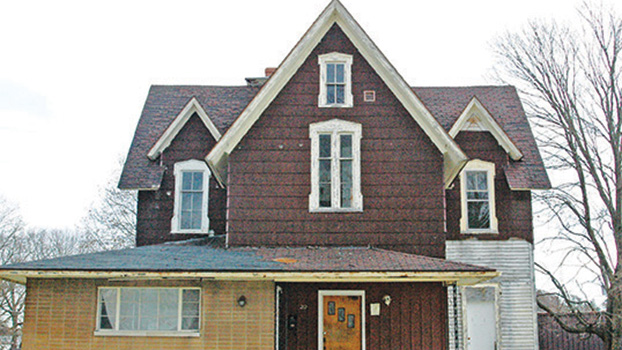 A 150-year-old home at 212 Main St. was demolished last week after more than a year of debate. (Leader file photo)

BUCHANAN — A 150-year-old home that has been at the center of debate since late last year was demolished Thursday at 212 Main St. in Buchanan.

Jeremy Frame, business owner of Frame Products Inc. at 206 Main St., purchased the home with the intent to grow his expanding business to the adjacent property where the historic structure was located.

“Originally, when I first bought it my plan was to make a parking lot out of it,” Frame said.

But before Frame could complete his plans, the Buchanan Preservation Society came forward during a November city commissioners meeting in an effort to protect the home they said possessed historic community value.

The Buchanan Preservation Society asked city commissioners to enact a six-month hold on issuing a demolition permit. They also asked Frame to consider reselling the property to someone who could restore it. While Frame said he had several discussions with the organization’s volunteers, a deal they could agree on never materialized.

“No one ever came down and gave me a legitimate offer,” Frame said.

Frame said he felt no rush to demolish the property and allowed a year to pass to see what options might be available that would make both sides happy. But after that time frame, he said it was time to take action. With a city permit issued last week, Frame initiated the demolition.

“The bottom line is the decision had to be made,” Frame said. “After one year, I think it was an ample amount of time. With our business growing and what we are trying to achieve, we are trying to help our community.”

The home at 212 Main St. was hailed for its Italian architecture. The Buchanan Preservation Society had also described it as a Buchanan landmark and contributing resource on the National Register of Historic Places.

The home was vacant for two years before Frame purchased it. He described the structure as in a state of disrepair, with no working plumbing or electrical and a crumbling foundation. He said it would have cost more than $200,000 to restore.

Following the demolition last week, volunteers with the nonprofit released a statement, but did not address specific questions about the home’s destruction when asked.

“The Buchanan Preservation Society works to protect and preserve residential, commercial, and industrial neighborhoods and their environments, including specific buildings and structures, while maintaining historic and genealogical records, objects and archives,” the statement read.

Frame said he was unaware that the home had any historical value when he first purchased it. Before it was demolished, he said he salvaged some of the home’s beams, the chandeliers and heaters that were inside the home.

Since the demolition, Frame said he has heard feedback while at his business.

“We have had nothing but positive people come down here and say, ‘We’re really happy that it was taken down, it looks so much better,’” Frame said.

The sentiment on the Buchanan Preservation Society’s Facebook page showed some different reactions. The nonprofit created a post when demolition began last week, encouraging people to contact City Manager Bill Marx. While many responded that they sided with the decision to knock the home down, others expressed sadness that it was being demolished.

“This was not a glorious day,” Frame said of the demolition. “This was a hard decision, but for progress, hard decisions have to be made some times.”