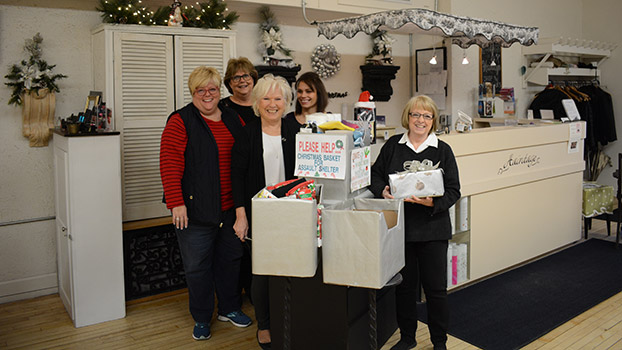 DOWAGIAC — One downtown businesses is keeping a 25-year-old holiday tradition alive this season by collecting donations for a regional organization.

The Hairitage, 142 S. Front St., is currently collecting donations for Domestic and Sexual Abuse Services, something the business has been doing for a quarter of a century this year. Monetary and other donations, such as personal toiletries, paper products, cleaning supplies, batteries, gloves, pajamas, diapers and more, can be dropped off at the salon until Dec. 31. The names of donors will be entered into a drawing for a gift, valued at $50.

“As a business, it’s nice to have a cause, and this is something we [the staff] all agree on,” she said. “This is women helping women.”

DASAS is an organization serving Cass, St. Joseph and Van Buren counties with the objective of leading efforts to end domestic violence and sexual assault in southwest Michigan. One of many of its services for survivors of domestic and sexual violence includes a 30-day no cost emergency shelter, for which items collected by Hairitage will go to.

Other services include a 24-hour crisis hotline, counseling, support groups, legal advocacy, access to housing and financial assistance, and more.

Meyers said she has been moved to donate to DASAS every year because she understands that domestic violence is widespread and has known women personally impacted by the issue.

“I don’t know why domestic assault has continued to happen generation after generation,” Meyers said. “I don’t know that I can [break the cycle], but I can help victims by collecting these products for them.”

For DASAS’ part, Director Rose Ludwick said the organization is grateful for the donation, especially around this time of year. She added that many of the survivors at the shelter are often touched to know that community members have donated to take care of them.

“This time of year is always difficult because people are living in shelter,” Ludwick said. “We like to be able to give [survivors] nice quality items to give them some kind of feeling of hope for the holidays. It is always helpful when businesses and organizations collect for us, because we have limited funding available. It’s always so helpful when people want to give back like that and work to give to the less fortunate around this time of year. … It makes a big impact.”

Ludwick also expressed thanks to Hairitage not only for collecting donations this year, but every year for the last 25 years.

“For an organization to stick with us and want to continue to support us all those years is very humbling,” Ludwick said.

Meyers said she hopes that domestic violence survivors will be helped by the donations collected by Hairitage, adding that she plans to collect donations again next year, as well.

“We hope we have made a difference,” Meyers said.