Feed the Hungry 2018 more than halfway to goal 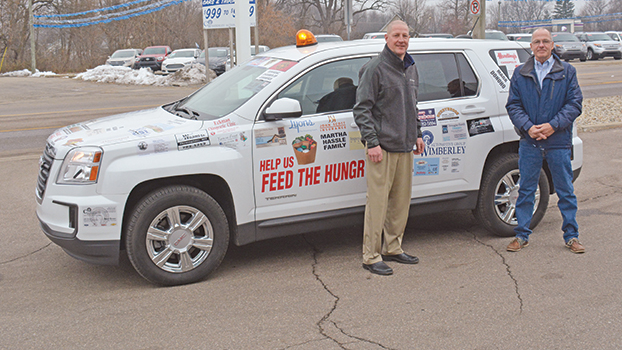 DOWAGIAC — Dowagiac’s Jim Allen has been a busy man.

With less than two weeks left before the annual Feed the Hungry campaign ends on Friday, Dec. 21, Allen has been driving around town in an SUV covered in stickers advertising local businesses in order to solicit donations  ensure the campaign reaches its goal.

“It’s been kind of crazy,” Allen said, taking a brief break inside the C. Wimberley dealership Tuesday afternoon. “I was just at the jewelers, as they are big supporters of Feed the Hungry. … I’ve really been out and about.”

Allen is just one of several volunteers who have been working hard this month to collect donations for feed the hungry. Currently, the 2018 Feed the Hungry Campaign is more than halfway toward its goal of raising $20,000. As of Tuesday, the program had collected $7,000, with an additional $6,000 in pledges. So far, more than 80 local businesses and individuals have donated to the cause.

“We are right on reschedule,” said Allen, organizer of the program. “We are two-thirds of the way toward our goal, but we still need help to get to the $20,000.”

Feed the Hungry is a holiday food drive designed to raise donations from the local community to be used to supply local food pantries. Money raised is also used to pay for visits from mobile food pantries, which can bring in more fresh produce than local food pantries, to various sites in Cass County throughout 2019. The program is organized by Allen and C. Wimberley Automotive, and ACTION Ministries co-chairs the program.

Last year, the program exceeded its goal by raising $26,000, something Allen said he would be happy to see happen again this year.

“I would feel so blessed,” he said.

This year, Allen said the program is stronger than ever. During the 2018 campaign, he said he has seen increased participation from the Cassopolis area and has received donations from individuals without having to ask.

With the support of the community behind the program, Allen said he is grateful and optimistic Feed the Hungry will reach its $20,000 goal this year.

On Saturdays, representatives with Feed the Hungry will be at the Dowagiac Family Fare and Harding’s, in addition to the Cassopolis Harding’s, from 10 a.m. to 2 p.m. accepting donations. To participate during the week, residents can drop off donations at 1st Source Bank, C. Wimberley Ford or Honor Credit Union, or call Allen at (269) 779-1691.