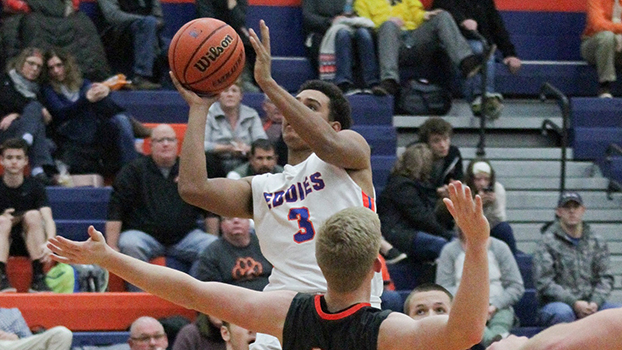 Tre Harvey goes in for a shot in the Eddies’ win over Allegan. (Leader photo/CAITLON PAULEY)

EDWARDSBURG — The last time the Edwardsburg community entered the high school gymnasium, they were celebrating a state football championship.

Fast forward a week later, and this time it was for the Edwardsburg boys basketball team’s home opener against the visiting Allegan Tigers.

Behind a strong defensive effort and plenty of support off the bench, the Eddies (1-1) defeated the Tigers (0-3) for a 60-40 win their first victory on the young season.

The Eddies got off to a slow start, turning the ball over just seconds into the game and soon found themselves down 4-0.

“First home game there were a little bit of nerves,” said Edwardsburg coach Stephen Wright. “We got a little bit excited and our brains shut down. But once we settled down and continued to play defense the good things started to happen.”

And happen quickly they did.

The Eddies forced turnover after turnover through the first half, which helped them balloon their lead to 32-19 at halftime, after the Edwardsburg used runs of 11-1 and 7-0 to break the game wide open.

Allegan’s 6-foot-6 forward Caleb DeKryger, who was quiet through the first half, finally woke up in the second and started to cause problems for the Eddies’ defense when he cut the lead to single digits.

“We knew he (DeKryger) was going to be a load for us,” Wright said. “We played him last year and he gave us fits because he is big and uses his body well. We made a commitment to shut everyone else down and cause problems for him.”

DeKryger had a game-high 17 points to go along with eight rebounds, a couple of block, a steal and an assist.

Every single player on the Edwardsburg team had valuable minutes and recorded a stat (points, rebounds, assists, etc.), which helped push the Eddies to a 9-0 run to finish off the game.

The Eddies dominated not just the scoreboard, but every statistical category as well.

Chase Sager had a team-high 14 points for the Eddies, while Tre Harvey also scored double-digit points with 10.

The Eddies improved to 2-0 with a 66-25 win over Allegan last Friday night.

Edwardsburg jumped out to a 21-4 lead on the Tigers, who dropped to 1-1 on the season with the loss.

The Eddies increased their lead to 33-10 by halftime and 52-21 heading into the final quarter of play.

Kaitlyn Zarycki had a game-high 25 points to lead the Eddies, who also got 12 points from Abbey Krugh and 10 points from Chloe Bartz.

Edwarsburg led 24-2 after one quarter and 56-9 by intermission.

Zarycki had a game-high 23 points for the Eddies.

The girls team will kick off the doubleheader at 5:45 p.m. with the boys game to follow at approximately 7:15 p.m.