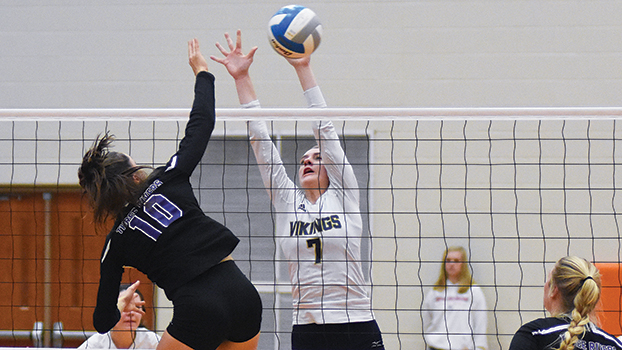 Nate and Pickens were both named Division 2 All-Region.

“My team truly peaked the last two weeks of the season and played their best ball of the year,” said Niles coach Jenny Nate. “Our wins were due to an entire team effort; they are all selfless and played various positions which contributed to our success, especially the wins we picked up during districts which led us to compete in the championship. Supported by their teammates, three players won postseason honors for their ability to consistently lead their team in various statistical categories, which earned them the following postseason honors.”

Harpenau finished with a team-leading 398 kills and was second in blocking with 72. She also had 77 service points and 18 caces.

“Abbigail was dynamic on the net this year and brought leadership and energy to the court,” Nate said. “She began the season at middle and then transitioned over to outside hitter where she led our team in kills and was second in blocking. Her consistency and ability to make big plays was critical to our success.”

“Nikola also had a big year on the net for her team, and on defense, as she was a middle hitter and six rotation player who stayed on the court all the way around and led our team in blocks with and was second in kills. Nikola is an intense player and she and Abbie were both very vocal leaders for our team.”

Pickens played libero, setter and eventually was a right-side hitter for the Vikings this past season.

“Bianca was asked to play various positions this season based on what her team needed her to do on a given day and she embraced each and every role she played and got the job done while maintaining excellent stats in several categories. She never came off the court and we relied on her ability to lead her team defensively and offensively.”