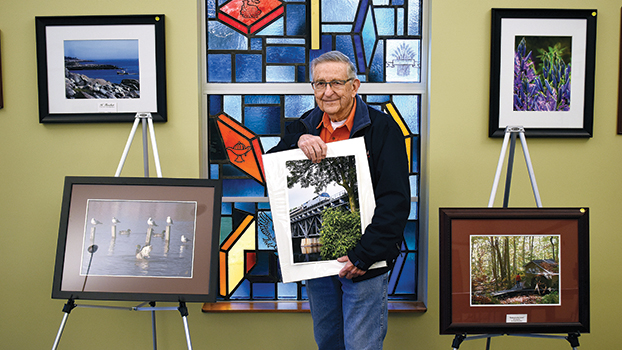 Harry Trescher, a longtime photographer, stands among artwork that is displayed at St. Paul’s Lutheran Church. Trescher is donating his photographs to benefit the church. (Leader photo/KELSEY HAMMON)

Correction: This article has been updated to reflect that Harry Trescher was a 3rd Class Petty Officer.

NILES — If a picture is worth more than a thousand words, then Harry Trescher’s artwork speaks volumes.

The longtime photographer, known for capturing iconic shots as a local photojournalist, as well as the serene nature of Berrien County, has chosen to donate more than 200 of his photographs to St. Paul’s Lutheran Church.

The community will have the chance to buy the photographs, starting Monday, Dec. 17. Proceeds from the art will be put in one of the church’s memorial funds and set aside for a future project.

People are welcome to view and purchase the photos between 10 a.m. to 1 p.m. Monday to Wednesday and 6 to 8 p.m. Thursday and Friday at the church, located at 1340 Sycamore St. in Niles.

Trescher recently celebrated his 90th birthday. His home in Niles is a testament to all he has captured through the lens of his camera during his lifetime. In fact, he had so many photos that he said he had begun to feel a little crowded.

“[The] rooms in my house were shrinking,” Trescher said.

Trescher’s daughter, Karen, encouraged him to do something with the photos. Trescher could think of no better time than to give his art to his church.

Displayed inside the church building, people can see the color and nature that inspired Trescher’s work. There are shots of deer grazing among green grass, vibrant fall colors that stand out along the St. Joseph River and historic buildings, like the Niles Amtrak station, pictured aglow with Christmas lights. He also is selling photos taken during his travels in Europe and Colorado.

Trescher recalled how his passion for art started with his father, a German immigrant and painter. Trescher was 10 years old when his father passed away, but he remembers clearly the bond they had through art.

“Of all I had, that’s the one thing I had from him,” Trescher said. “That’s the thing we worked together on.”

A scholarship in grammar school gave him a shot at studying at the Art Institute of Chicago.

“It was an experience that proved I was not as gifted as I wanted to be,” Trescher said.

But he did not give up on the craft. Right out of high school, Trescher began served in the Army from 1947 to 1948. It was on a base in Virginia where his love for photography began to take shape. Armed with only a plastic camera, Trescher set out to capture various daily life at the base. He had to sneak into the base’s x-ray lab to use chemicals to develop the photos.

Like his father, Trescher also had a talent for drawing. Following his service, he used funds earned through the G.I. Bill to take a course at the Advertisers Art School of Chicago and spent some time working for a photographic studio that created Sears Roebuck catalogs. Trescher spent long hours drawing chairs, tables and lamps depicted on those pages.

“This is the break I wanted and really needed, since I was now married,” Trescher said.

In 1950, Trescher served in the Korean War as a 3rd Class Petty Officer in the Navy. It was here that he had a strange encounter that made him feel like he was destined to be a photographer. That moment occurred when an officer strolled up to him and announced that there was no place for a photographer on his ship, despite the fact that he had not officially been assigned to the role. Trescher was transferred to a base in Coronado, California and given the chance to work in a Naval photo lab.

Throughout his lifetime, Trescher has worked in a number of jobs. He’s peddled Electrolux vacuums, hauling the clunky machines around the streets of Chicago and worked nights unloading freight for 55 cents an hour. While it was not always how he earned a paycheck, he continued to find ways to use his photography talents.

Another break came in 1953, when Trescher was hired as a photojournalist for the Niles Daily Star. It was through this job that Trescher captured an iconic shot of former President Richard Nixon speaking to a crowd and several children perched on a railroad sign to watch the commotion.

Trescher eventually went to work for an insurance company, but photography remained an important part of his life. His daughter, Karen, was inspired by this and worked as photographer for a number of years in Denver, Colorado.

Looking back on his work, Trescher is proud to have captured such a wide variety.

“It’s a great gift for Christmas and beyond,” Trescher said. “People will be looking at them for the rest of their lives maybe. Hopefully they will like what they see and buy what they like.”