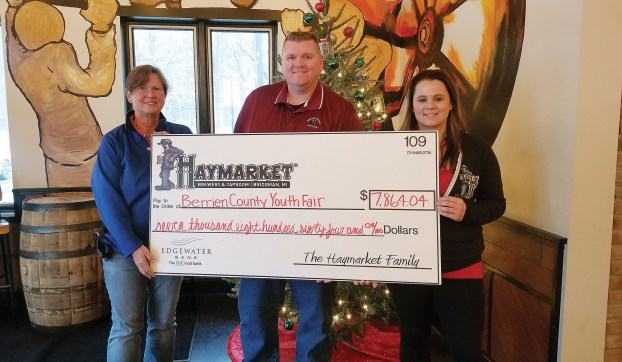 BERRIEN SPRINGS — The Berrien County Youth Fair was presented with a check at the Haymarket Taproom and Brewery on Thursday, Dec. 6.

The BCYF accepted a $7,864.04 donation from the Haymarket Taproom and Brewery quarterly Giveback program, to be used to for the Fund a Need program.

The Berrien County Youth Fair was chosen as the 2018 third-quarter giveback charity and also hosted a corn hole tournament and children’s pedal pull on Sept. 15. Haymarket Brewery officials presented a $7,864.04 check to Fair Board President Corey Burks and BCYF Fundraising Co-Chairmen Karen Klug this past Thursday.

The Berrien County Youth Fair plans to use the donated money for the Fund a Need projects. A list of improvement projects in and around the fair.

The 2019 Berrien County Youth Fair is scheduled for Aug. 12 to 17. This year’s theme is “Country Nights and Carnival Lights.”

Blossomtime announces Blessing of the Blossoms