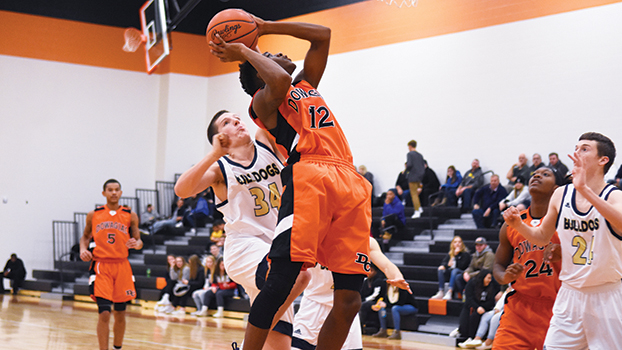 Dowagiac’s D.J. Lanier goes in for two of his team-high 16 points in the Chieftains’ loss to Otsego Friday night. (Leader photo/SCOTT NOVAK)

Visiting Otsego overwhelmed Dowagiac Friday night by outscoring the Chieftains 25-8 in the opening quarter en route to a 69-50 victory.

Dowagiac (1-2) tried to fight its way back into the contest in the second quarter, cutting the Bulldogs’ lead by 14 points by halftime. The Chieftains still trailed 38-24 at the intermission.

The start of the second half mirrored the beginning of the game as the Bulldogs came out red-hot from the field, both inside and outside of the 3-point arc.

The Otsego lead reached more than 30 points at one stretch in the second half before the Chieftains made another run, but could not get any closer than their halftime deficit.

The Bulldogs’ Addison Atwater poured in a game-high 24 points, which included eight of Otsego’s nine 3-pointers.

Against Paw Paw on Nov. 30, Dowagiac poured in 47 second-half points to pull away to the easy 77-58 win over Paw Paw.

The Chieftains led 15-7 after one quarter and 30-23 at the intermission.

“Game started slow and ugly,” said Dowagiac coach Danum Hunt. “The guys were still feeling the fatigue and residuals from the hard fought game with Benton Harbor. We were able to pull it together by pressuring their guards. Brookins shot the ball extremely well. He got us going offensively. We can’t afford to have long hangovers from big games.”

Dowagiac is back in action Tuesday when it travels to Plainwell for another Wolverine Conference non-divisional contest. Tipoff is scheduled for 7:15 p.m.