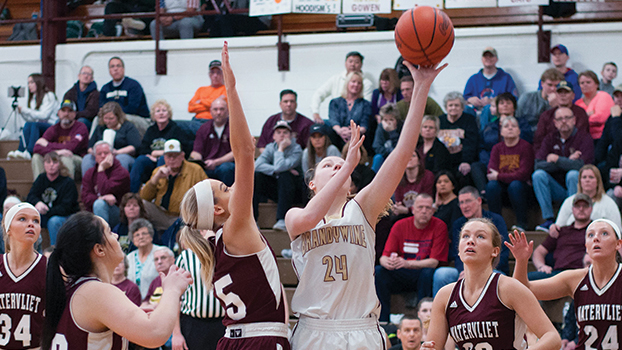 PORTAGE — Visiting Niles held Portage Northern to just one basket in the first half as the Vikings cruised to a 56-8 win over the Huskies in SMAC West Division action Friday night.

The Vikings outscored Portage Northern 20-6 in the second half with the running clock.

Kamryn Patterson and Reese Davies both finished with seven points.

PORTAGE — Visiting Niles was outscored 8-4 in overtime in its 53-49 loss to Portage Northern Friday night.

Niles was outscored 10-4 in the third quarter, but rallied in the final eight minutes of regulation to deadlock the score at 45-45 as the Vikings scored with 14 seconds left in the final quarter.

“Our defense was much improved, but we took a step back offensively,” said Niles coach Tyler Dendy.

Brayden Lake led the Vikings with 13 points, while Jordan Brown finished with nine points and Richie Heath and Adrian Thomas both had seven points.

BRIDGMAN —  Visiting Brandywine improved to 2-0 on the year as it opened up BCS Athletic Conference Red Division play with a 62-23 win over Bridgman last Thursday night.

BRIDGMAN — The Bobcats improved to 3-0 and 2-0 in the BCS Red Division with a 34-23 win over host Bridgman Friday night.

Both teams struggled to put the ball in the basket as the two combined for just 26 points at halftime with the Bobcats leading 18-8.

Luke Blesy had nine points to pace the Bees.